Joao Felix has been linked with a major move to the Premier League but his Portugal debut in his country’s 3-1 Nations League semi-final win over Switzerland should quieten some of the hype surrounding the youngster.

While the hero once more was the great Cristiano Ronaldo as he scored a hat-trick in the Estadio Dragao, the 19-year-old hopeful styled as his successor had a difficult evening.

Felix has enjoyed a stunning season for Benfica in which he netted 20 goals in all competitions for the Portuguese champions. Those performances have led to reports that Manchester City and Manchester United are willing to buy out his huge £106m release clause.

As a result, thrust in for his international debut in a Nations League semi-final on home turf, the expectations were high with City and United supporters watching closely.

However, Felix struggled to get involved in the game. So much so, in fact, that it would be difficult to argue that he even managed to show glimpses of his potential to excite. 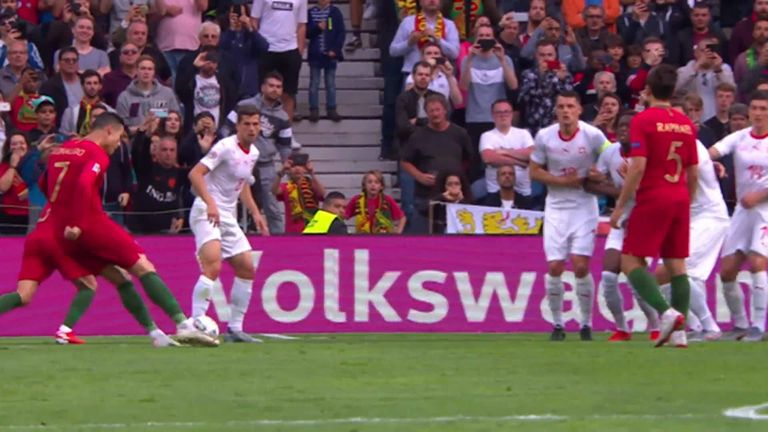 Cristiano Ronaldo hit a trademark free-kick for Portugal against Switzerland

There were a couple of failed attempts to hold the ball up and while the service into him was largely unimpressive, some wonderful work from Ronaldo did present him with a one-on-one opportunity against Yann Sommer that he could only lift over the crossbar. "I think he just lost his composure there, the teenager," Alan Smith told Sky Sports.

When he was unable to make an impact after the interval, Felix was removed in favour of Goncalo Guedes midway through the half. "He could never really get a foothold in the game," said Smith. "Most of it went on around him but he will learn from that."

1 – Almost chases down goalkeeper Yann Sommer in the first minute

32 – Tracks back defensively and shovels the ball down the line

68 – Upended by a late challenge from Fabian Schar

71 – Substituted in favour of Goncalo Guedes

Speaking to Sky Sports before the game, Portuguese coach Carlos Carvalhal had already preached patience in regard to Felix and suggested that the youngster could benefit from another season in his homeland before testing himself in a tougher league overseas.

"The discussion here, even in Porto, is that it is better if the boy plays one more year at Benfica to consolidate a little more," Carvalhal told Sky Sports. 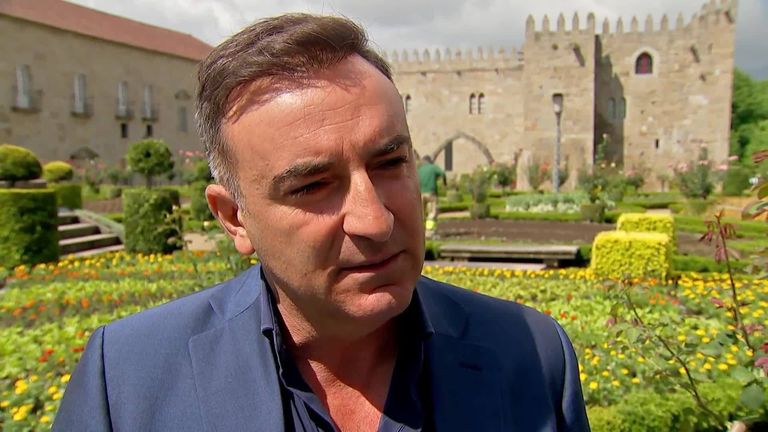 "Why are people talking about that? It is because of what happened recently with Renato Sanches, the boy who went to Bayern Munich for €45m. Everyone expects that when you buy a boy for €45m they go to the club and make a big difference. It is what everyone expects and it is not the reality because the boy was not ready yet. This is the danger.

"If Joao Felix goes to a team that do not have many stars on the team and he will be one of the main stars of the team, because he costs €120m everyone will expect that he wins games on his own. He will not be ready to do that. He must grow up as a player. He is a fantastic player but he needs that time to grow. This is crucial for his career."

While Premier League viewers will have been disappointed by this underwhelming debut, it is worth remember that this is a player with only 26 top-flight appearances to his name. Carvalhal believes that if Felix is handled carefully, his talent will show itself - in time.

In fact, he pointed to the example of Ronaldo, who moved to Manchester United as a teenager and took time to impose himself, only winning the title in his fourth season there. It was the influence of a hugely experienced manager that helped him develop.

"He was very lucky to go to Manchester United at that moment with Sir Alex Ferguson," added Carvalhal. "I remember that Cristiano Ronaldo sometimes played and sometimes Sir Alex Ferguson brought the expectations down by leaving him out of the team also.

"He needs something like that. I believe, because he is a very clever player and the agents are clever also, that if he has the opportunity he will choose the team where the manager can manage him in a better way and not create a big expectation around him."

What did you make of Joao Felix? If you're reading on skysports.com comment below to get involved in the debate, but please adhere to our House Rules. If you wish to report any comment, simply click on the down arrow next to the offending comment and click 'Report'.