Henderson has made Gareth Southgate's England squad for the first time; follow England vs Czech Republic on Friday with our live blog on Sky Sports website and app

But Dean Henderson's response to a public chiding from the Sheffield United boss, a man who has always known which buttons to press when it comes to his players, was no surprise to those who know him.

Henderson's team-mates had thwarted the champions of Europe until the 70th minute when Gini Wijnaldum's volley, adequately struck but heading surely into leather gloves, squirmed through the Manchester United loanee's legs.

"I'm not going to put my arm around him and rub his head; if he wants to play for Man United and England, he's got to do better," warned an infuriated Wilder.

The tough-love tactics were questioned but the answer soon came at Vicarage Road. Watford, short on possession but presented the game's big chances, were twice denied by the purposeful figure in orange.

There was a big save, one on one, to deny Danny Welbeck, Henderson's 6ft 2in frame biding its time. A second, sprawling stop scuppered Craig Dawson. "He's come roaring back," said Wilder, knowingly. 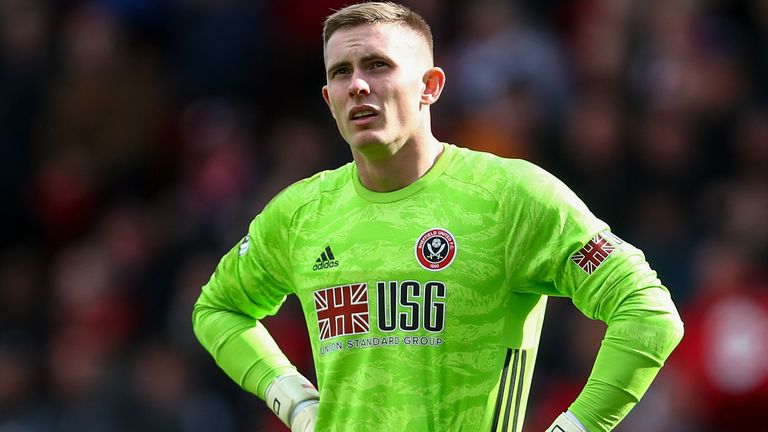 It was another crucial test passed, on unforgiving Premier League terrain, and Henderson's reward is a first senior call-up for his country.

The 22-year-old replaced the injured Tom Heaton and will likely watch from the bench as his new England colleagues seek to secure their spot at Euro 2020 but a summons from Gareth Southgate - a regular visitor to Bramall Lane this season - has felt inevitable for a player who has kept more league clean sheets since the start of last season than any other in England's top four divisions.

The journey is one Paul Hurst has seen at close quarters, but when the call came, he wasn't sure.

Henderson's agent had made the offer - the youngster had progressed well in Manchester United's academy since arriving at 14 from Carlisle and was fresh from a spell at National League Stockport - but money was tight at Grimsby and manager Hurst was happy with his options as the 2016/17 season loomed.

He had an undoubted No 1, James McKeown, and Andy Warrington, the goalkeeping coach who doubled as kit-man, seemed sufficient back-up.

"I initially said we couldn't take him," Hurst, now at Scunthorpe United, tells Sky Sports. "But it turned out that Dean had family in Grimsby and it was to be a free loan, so I agreed, even though I reiterated that I was really happy with my first-choice goalkeeper and he probably wouldn't play."

Hurst had swapped Blundell Park for Shrewsbury's New Meadow by the time Henderson had finally made his Mariners debut but on the training ground he had seen "straight away how good he was" and a summer later convinced Old Trafford's loan arranger, Les Parry, that League One would provide the crucial next stage of his development.

The young Cumbrian started with two clean sheets in the third tier, finished with 14 and helped Shrewsbury to the League One play-off and EFL Trophy finals in a breakout season, as well as being named in the PFA's team of the year.

It said a lot, thought Hurst, that Henderson - drafted to the Man United bench for an FA Cup tie in 2016 but yet to make a first-team appearance - was relishing the gruelling Saturday-Tuesday schedule as he sought competitive minutes away from the comfort of Carrington. He was confident - cocksure even - but his drive and dedication off the pitch impressed Hurst as much as his ability on it.

"He was a good shot-stopper but what really made him stand out for me - certainly lower down the leagues - was his willingness to take crosses and alleviate pressure. A lot of goalkeepers are happy to stay on their line but Dean had really good athleticism, a great spring and he could use it properly. Every now and then there might have been an error but the amount of times he took the pressure off the defenders and gave them confidence. 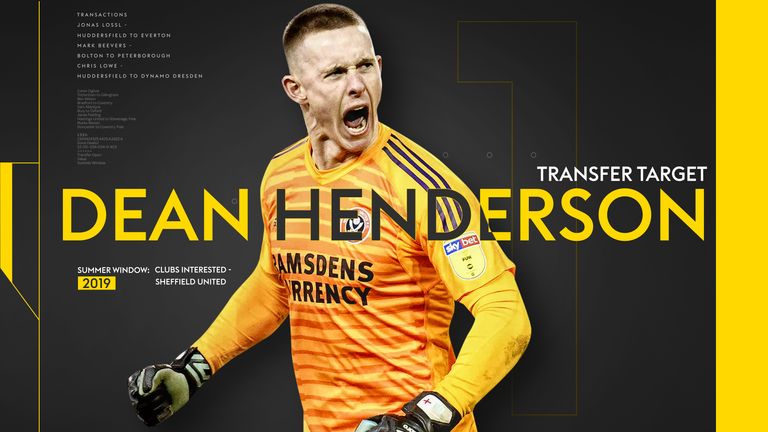 "He was confident in his own ability but he had the work ethic too. We had a dressing room full of characters - Dean was certainly one of them - but he backed up what he did. I think some of the lads looked at him initially and thought, 'Who's this?' - people can get the wrong impression of him at times - but he was popular because he could back it up.

His competitive streak stood out in the earliest days. Carlisle academy coach Ben Benson, reminiscing recently with the Whitehaven News, recalled a game against Burnley that finished "about 15-0" but left a young Henderson "in floods of tears" because he thought he should have done better with the third goal. "He doesn't want to be beaten at anything," said Manchester United's Alan Fettis.

That trait encouraged Wilder to take the plunge in the summer of 2018, too. "It is a position you've got to get right in terms of not only ability, but character too - he's a winner," said the Bramall Lane boss, who had long tracked a goalkeeper he felt could deliver in the "big moments" for a side ready to go again at the top of the Championship.

One had come before the end of August, Henderson standing bold to outwit one, two, three yellow Norwich shirts, but plenty more followed. There was a memorable string of instinctive stops against Rotherham when one point could well have been none, a lunge to deny Brentford's Neal Maupay from close-range with his outstretched foot when the pressure of the promotion race hung heavy.

Under the guidance of Darren Ward - the Sheffield United goalkeeping coach endorsed by the Shrewsbury camp - and with admirable support from the man he replaced between the posts, Simon Moore, Henderson played all 46 games in the Blades' promotion season.

He kept 21 clean sheets to win the league's golden glove award and established himself as England U21s' No 1 in the process. "Getting this club back to where it belongs made me really emotional," he told local radio. "I've told the gaffer not to let me leave."

His return took time to secure - David de Gea's contract and a new Old Trafford deal for Henderson himself meant negotiations were frustratingly protracted - but he was always sold on it and is so far rising to the challenge of an increased workload at the level above.

Only Liverpool have conceded fewer league goals so far and while the Blades backline has been structurally sound as a collective, Henderson's individual impact - he boasts the best numbers in the division when it comes to Opta's metric of expected goals prevented - is striking.

His badge-thumping, crowd-stoking celebrations have made him a fan favourite wherever he has been but the Bramall Lane bond is especially strong - so much so that Sheffield United's social media team conceived 'Deano Cam' to capture the reactions of an employee who won the club's community award last year and feels far from temporary.

"The way he interacts with the supporters has been brilliant - he's always last off the pitch after the end of the game," said Wilder last season.

The image of Henderson the showman is one Hurst remembers fondly, even if exuberance has occasionally proved his undoing.

In the build-up to one match with Shrewsbury, he captioned himself 'The Greatest', only to make a mistake that cost his side and drew gleeful taunts from the opposition.

In another match, at Blackburn, he retaliated when objects were thrown on the pitch and was subsequently charged with improper conduct. Hurst didn't condone that but finds Henderson's appetite for the game refreshing.

"I look at some young lads and question whether they enjoy what they do. It should be fun - there aren't many better jobs about. You can't say that about Dean. He loves the game and he has a big heart, too. He does a lot of community work and that's often overlooked with footballers."

Occasional lapses on the pitch - a casual pass against Leeds in a Yorkshire derby, two errors in the closing minutes at Aston Villa, a howler against Romania this summer at the U21 European Championships - are further evidence, Hurst thinks, that Henderson is "still maturing" but has not been surprised that, as against Liverpool, setbacks have served only as fresh motivation. Seven successive clean sheets followed that implausible Villa Park collapse.

"It feels like some young players can't take criticism these days, whether from the manager or the stands," Hurst says.

"Dean didn't make too many errors but when he did and we questioned him, he personality was to come right back. He wants to prove people wrong. He'll make the odd mistake but what goalkeeper doesn't? He's young and he'll keep improving."

He has improved and impressed enough to earn a new Manchester United contract to the summer of 2022, with the option of a further year, and has made no secret of his target to wear the No 1 shirt for parent club and country.

Old Trafford chiefs continue to closely monitor his progress, while Ole Gunnar Solskjaer has spoken of his "top-level talent". But De Gea's improved deal - one that makes him the highest-paid goalkeeper in the world - runs to 2023 and Henderson has proved he is in no mood to tread water.

This is what dreams are made of... it’s a dream come true to receive my first @England senior call up!! 🔜🔛🔝 pic.twitter.com/gmzUrJSvZk

"A lot of people wouldn't have had the bottle to go out to the lower leagues," as he puts it himself. "Especially with someone like David de Gea in front of you, you've got to find something different as you're never going to get thrown straight in as an academy keeper. You've got to make a unique path and I've done that."

The path should continue to be an exciting one and Hurst will be watching.

"He'll say he should be the best and it sounds a bit tongue-in-cheek but deep down there's a belief he can be. I'd love to see him wearing that No. 1 shirt for England. He's a goalkeeper who's got all the tools - and he's only going to get better."