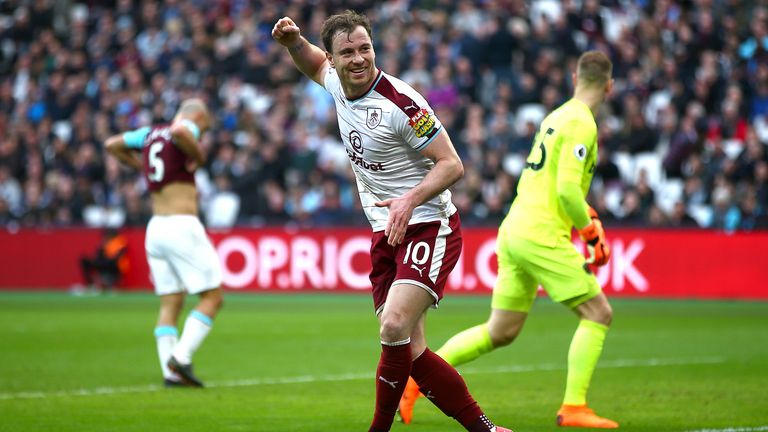 Chris Wood came off the bench to score twice and assist Ashley Barnes in a 3-0 victory over West Ham amid fan protests.

The New Zealand international's introduction in the second half inspired a comfortable win for Burnley against a backdrop of crowd demonstrations against West Ham owners David Sullivan and David Gold.

Burnley had not had a shot on target until the 66th minute when Barnes smashed in the visitors' opener before Wood tapped in a second (70) and capitalised on Joe Hart's error for their third (81).

Man of the match: Chris Wood

West Ham were in full control during the opening 45 minutes as Burnley failed to test Joe Hart's goal. The host's first goalscoring opportunity came to Marko Arnautovic in the 12th minute - breaking free into the box - but his low drive from a tight angle was stopped by the feet of goalkeeper Nick Pope.

Joao Mario fired his volley towards an open goal over the bar moments later, and in the 23rd minute, West Ham had a controversial penalty appeal turned down. Aaron Cresswell's cross hit Aaron Lennon's arm at a very close proximity, but referee Lee Mason elected to only award a West Ham corner.

As David Moyes' men continued to push numbers forward, West Ham's next big chance arrived in the 38th minute. Angelo Ogbonna's looping header caught the Burnley backline off-guard before the ball landed to Manuel Lanzini in a one-on-one position, but his low shot was blocked by Pope's left boot.

Sean Dyche kept the same lineup that beat Everton 2-1 in their last outing.

The second half sparked into life when Sean Dyche elected to bring on Wood on the hour-mark. In the 66th minute, the 26-year-old held the ball on the right flank before he teed up the onrushing Barnes, who smashed his effort first-time into the top corner.

After a group of protesters made their way onto the pitch and beneath the director's box, Burnley scored almost instantly after the restart. Barnes fed the ball to Lennon, who squared he ball across the goal-mouth for Wood to get his first of the game.

Ten minutes before time, Burnley condemned West Ham to a terrible afternoon when Hart spilled Johann Gudmundsson's powerful drive which allowed Wood to capitalise on the opportunity to get his second of the afternoon. And as the game drew to a close, Trevor Brooking cut a lonely figure in the director's box as Gold and Sullivan left early.

West Ham United have lost three league games in a row by a margin of 3+ goals for the first time since March 2008.

Burnley have now recorded their highest points tally in a single Premier League season (43), with eight games still to spare.

Chris Wood is the first player to be involved in three Premier League goals (two goals, one assist) as a substitute in a match since Steven Naismith scored a hat-trick for Everton against Chelsea in September 2015.

Man of the Match - Chris Wood

West Ham dominated the opening 45 minutes, but as soon as Wood came on midway through the second half, the game was turned on its head.

Wood quickly forged an effective partnership with Barnes up front and assisted his team-mate's goal before getting two himself, and he did it all in just 30 minutes.

David Moyes has appealed to West Ham fans to get behind the team as they battle to avoid relegation from the Premier League.

David Moyes: "We missed two or three great chances in the first half. I thought we played well. In truth, two minutes of madness changed the whole game when it never really looked like we were under a great deal of threat. We played well so it's just disappointing the way it went.

"We have to deal with our own stuff but the stoppages didn't help the concentration. It's down to us. The game changed, we missed the opportunities in the first half and we didn't start the second half quite as well. It never looked like the way it was going that's for sure."

Burnley boss Sean Dyche says his side were not at the races in the first half but put in a very thorough performance in the second half to beat West Ham.

Sean Dyche: "The first half they were the better side. We weren't at the races. What kept us really in it was the diligence to the simple stuff, to the basics. We kept our shape and all the little details in the game to just about hang in there.

"They had a couple of good chances. Pope makes a save. We had one over the top and it was a reminder to us that you can't give anyone a moment in this division. In the second half it was a very good display.

"We stayed calm with some interesting things going on today and delivered a good second half."

After the international break, West Ham host Southampton on March 31. Burnley, meanwhile, travel to West Brom on the same day.