Free match highlights: Pep Guardiola sees his side concede five goals for the first time ever in his 686th game as a manager; Leicester keep up their 100 per cent record this season in the Premier League; Jamie Vardy scores two penalties in hat-trick show

Jamie Vardy scored a hat-trick as Leicester ran riot in a stunning 5-2 victory over Manchester City at the Etihad Stadium.

Man City dominated early on and took the lead through Riyad Mahrez's superb half volley with his weaker right foot from 15 yards (4), but Leicester equalised with their first shot on goal as Kyle Walker tripped Vardy in the box; the England striker duly converted the penalty (37).

With Leicester's second shot, Vardy produced a stunning flick beyond Ederson from close range (54), before again winning a penalty, this time from Eric Garcia's foul, and converting for 3-1 (58).

Sub Maddison made it four with a screamer from 25 yards, curled into the top corner (77), before Nathan Ake's header looked to have made the scoreline look slightly more respectable (84).

But Youri Tielemans rounded off a fabulous win, and a nightmare day for the hosts, slotting a penalty after Benjamin Mendy had fouled Maddison (88).

The result means Pep Guardiola has seen his side concede five goals for the first time ever in his 686th game as a manager, while Leicester keep up their 100 per cent record this season in the Premier League.

Man of the match:Jamie Vardy

Man City had all of the ball in the first half, and were ahead via a piece of magic from former Leicester man Mahrez, hitting a fine half volley into the top left corner from the right of the box after Kevin De Bruyne's corner had been cleared.

The hosts were camped in Leicester's defensive third, and should have gone 2-0 up as De Bruyne's wicked free-kick was met by Fernandinho eight yards out, but he failed to make proper connection with his header, collected gratefully by Kasper Schmeichel.

Despite their dominance, Man City still allowed for gaps in their defence, and Leicester got their chance when Harvey Barnes played Vardy into the box, forcing Walker to bring the striker down.

Vardy blasted home, top left corner, meaning the 33-year-old has won more penalties (19) and scored more (22) than any other player in the Premier League since his debut in August 2014.

Despite an erratic start to the Premier League season across the board, nobody could have predicted what came in the second half at the Etihad.

First, Vardy got on the end of Timothy Castagne's low cross from the right to produce a fine flick past Ederson - described aptly by Gary Neville on Sky Sports as a 'Cruyff dink' - for his and Leicester's second.

It was 3-1 just four minutes later as Vardy again got goal side of Garcia in the box, going down after brushing the Man City defender, and yet again Vardy dusted himself to finish, low to Ederson's left.

Man City's young striker Liam Delap, brought on just six minutes into the second half, hit the crossbar with a header from deep, but the next goal went to Leicester again as Maddison, cutting in from the left, curled a beauty over Ederson and into he top corner from range.

Ake scored his first goal for the hosts with six minutes remaining, climbing highest to a Mahrez corner for 4-2, but yet another penalty fell Leicester's way as Benjamin Mendy brought down Maddison just inside the box. With Vardy already subbed, Tielemans duly converted for a famous victory.

Man City made two changes from the win at Wolves as Eric Garcia, linked with a move away from the Etihad, replaced the injured John Stones, and Riyad Mahrez came in for the injured Gabriel Jesus to face his old side.

Aymeric Laporte and Ferran Torres were on the bench for the hosts.

For Leicester, Jonny Evans and Daniel Amartey replaced Wilfred Ndidi (injured) and Ayoze Perez, who dropped to the bench.

In a season where clean sheets seem to be a rare commodity, Guardiola will still not have expected to see such a concerning capitulation from his side, who conceded five goals in a home game for the first time since February 2003.

For Leicester, three wins from three have gone some way to ridding the ill feeling from the end of the 2019/20 season, and with Vardy, even at 33, they still have one of the very best forwards in the game.

"They were so good in the opening 25 minutes but as soon as Leicester broke on them a couple of times, you felt that, psychologically, it just damaged them," Neville told Sky Sports.

'Man City a shadow of the team we know'

"City were a shadow of the team we have seen for the last few years. They are missing their 'fox in the box' and they huffed and puffed for most of the game.

"Leicester frustrated the life out of City. Anyone playing City in the next few weeks - that's the blueprint. City had five shots on target in the whole of the 90 minutes.

"Once you break the first press and get at them, you have a real chance of hurting them. City shot themselves in the foot with the penalties they gave away."

"Man City have just become a possession-based team. I'm not blaming it just on Rodri. But he doesn't read danger like Fernandinho and the backline get exposed time and time again.

"How many times does it have to happen before City rectify it? Everyone talks about the defence - and it was a shambles, it really was embarrassing.

"But there is more to it than that. They are weak, too weak."

Man City boss Pep Guardiola: "I think today the problem was we put an extra pressure on ourselves to score the second one and the third one, when they didn't want to play, just defend and counter-attack. 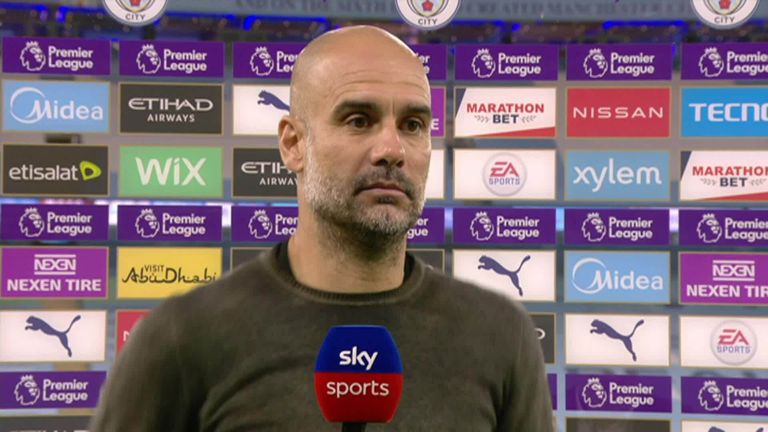 Guardiola: We have to accept it

Asked how hard it would be to pick his players up after the defeat, Guardiola said: "Of course it's hard, but still it's the second game in the Premier League. We have to try to see what you have to do to avoid it next time. This is my
job. Of course I feel bad for the guys, for the club. We have to analyse and improve."

Leicester boss Brendan Rodgers: "To beat Man City you have to run like hell. So you have to have that mentality. The tactical discipline was good and because of the counter press you have to get your passes off quick. 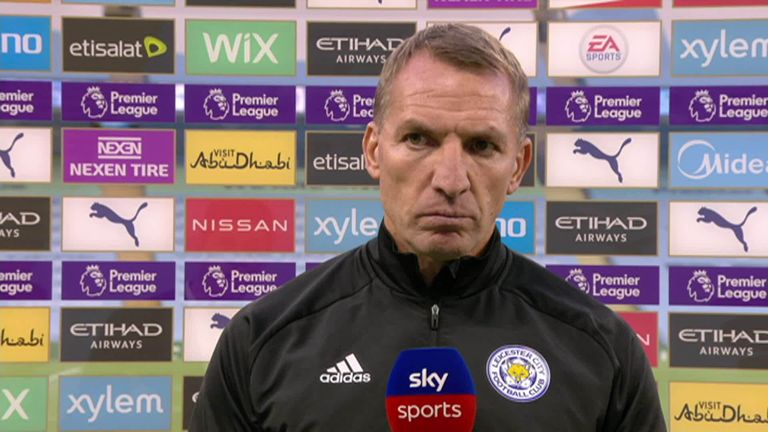 "We fell behind to a brilliant finish. We showed good composure and stayed calm and showed enough that we could cause them a problem. It was a brilliant performance and result. It has taken me 13 years to play that way. I'm very much about attacking and being aggressive. I always try to be positive but I need to think of other ways to get results in theses games.

"Bringing the game into our half of the field, block off one of their midfielders and you have to be good in the transition to get two or three passes to get out. We took out the press from the goal kicks and went direct but overall the players had to work very hard."

A game for the ages - The stats

"He knows exactly what he's doing. Precise, efficient, and brilliant," said Sky Sports' Gary Neville as the Leicester striker drew his second penalty of the day from a bewildered Manchester City defence.

Vardy tormented Pep Guardiola's Man City despite having just 21 touches of the ball.

Here's how he's evolved into such an efficient goal scorer...

Man City now go to Burnley in the Carabao Cup fourth round on Wednesday at 7pm, before going to Leeds on Saturday Night Football, live on Sky Sports Premier League at 5.30pm.

Leicester host West Ham in the Premier League, at midday next Sunday.