Report and free highlights as Leandro Trossard's first Brighton goal since January 31 ends run of five games without a win for Seagulls to lift them to 16th in Premier League table; Che Adams' third goal in three games not enough for Southampton, who have now won one of last 12 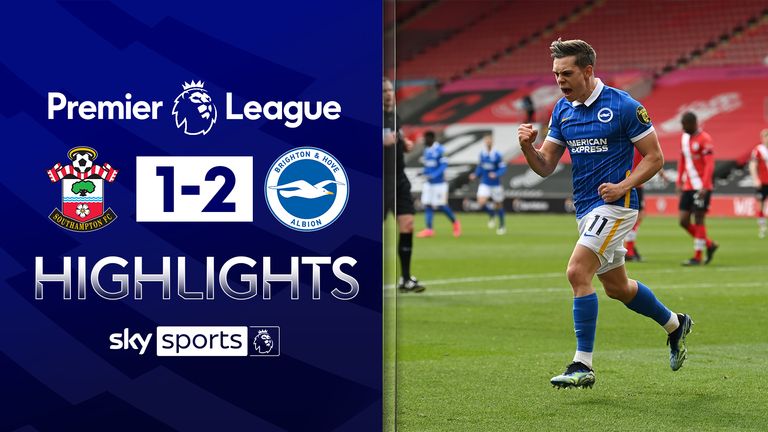 Leandro Trossard's second-half strike provided a vital winner for Brighton to move three points clear of the relegation zone with a 2-1 victory at Southampton.

Trossard finished off a flowing team move from the visitors, firing Danny Welbeck's deft touch high beyond Fraser Forster, 11 minutes after half-time to end a run of five games without victory.

It looked like the Seagulls would again rue their game management after Lewis Dunk's booming header from a corner for the opener (16) was cancelled out by another finish from Che Adams (27), his third in three games.

But the Belgium international's winner, after Pascal Gross had passed up a fine chance to restore the visitors' lead, will provide a serious relief for the visitors, who not only rise three points above 18th-placed Fulham but also leapfrog Newcastle into 16th.

Man of the match: Danny Welbeck.

A game between two of the form table's worst sides never promised to be a classic but provided opportunities from the off at St Mary's, where Stuart Armstrong fired straight at Robert Sanchez when well placed early on.

Brighton's foothold took a while to emerge but once it did, they took instant advantage. Neal Maupay found space from Welbeck's deft backheel to force Forster into his first save of the afternoon, before leaving him little chance from the resulting corner as Dunk towered above Ryan Bertrand to head home.

No sides have given up more points from winning positions than Brighton and Southampton, so an equaliser from Adams 11 minutes later came as no great surprise, latching onto Bertrand's flick to volley home and continue his goalscoring resurgence.

But before the break, they should have made amends. More Welbeck class released Dan Burn inside and allowed him space to find Gross in acres of space, only for the German to blast straight at Forster when one-on-one.

A change at the break saw Burn replaced by Andi Zeqiri and a change to a five-man midfield, which paid dividends barely 10 minutes into the half when Lallana picked up the ball on the half-turn and fed Welbeck. His one-touch ball into Trossard was inch-perfect, and the Belgian did the rest.

Lightning would have struck twice had Adams not been denied by a sprawling Sanchez minutes later when he should have levelled.

From then Brighton did learn their lesson, restricting the hosts to half-chances in the final half-hour and earning a most welcome of victories to ease their relegation worries, and leave them only four points behind Southampton in the table.

Southampton boss Ralph Hasenhuttl: "It's very disappointing what we showed today, especially in the second half. In the first half, there was also a little bit of a feeling that the opponent wanted it more.

"And then the goal conceded we are in normal shape. Everybody's in their position. This cannot happen. We were defending far too sloppily in that moment."

Brighton manager Graham Potter: "We had to change at half-time because of the injury, and then that forced a change of shape.

"We were just trying to organise that and make sure we're we learn a little bit from what we did first half, in terms of just picking up second balls better, making sure we stay centrally compact. I thought we did that quite well. And then it's just about the players quality in terms of how they find the spaces.

Man of the match - Danny Welbeck

Welbeck rolled back the years at St Mary's with a number of deft touches and flicks in and around the Southampton box, most tellingly with a perfect pass, more difficult than it looked, for their winning goal.

On days like this, you wonder where he would be still had he not found life so tough through injuries in recent years, because he looked a class above the Southampton defenders at times.

Southampton travel to Bournemouth in the FA Cup quarter-finals next Saturday; kick-off at 12.15pm.

Brighton are on Sky Sports next weekend in a relegation six-pointer with Newcastle at the Amex Stadium, live from 7.30pm; kick-off at 8pm.