Fabinho's role in Liverpool's midfield and why his absence affects others, explained with Jurgen Klopp's help

With exclusive insight from Jurgen Klopp, we assess the importance of Fabinho's presence in Liverpool's midfield and the impact on his team-mates; watch Man Utd vs Liverpool live on Sky Sports Premier League from 8pm on Thursday; kick-off 8.15pm

It was the second goal in the final moments of Liverpool's 2-0 win over Southampton that confirmed victory and calmed nerves at Anfield. Jurgen Klopp had seen his side concede late equalisers in their previous two Premier League games. This one ended the right way.

On the face of it, Thiago Alcantara was an unlikely scorer. This was his first goal for the club since signing from Bayern Munich in September. But perhaps it should not have been such a surprise. Fabinho's presence alongside him in midfield allows for a more advanced role.

In a season that has been defined by the absence of key central defenders, the loss to the midfield of a man who has actually been present on the pitch for much of the campaign has been easy to overlook. Not being able to play Fabinho there has undermined Liverpool.

At 27, this is the Brazilian's peak. He had established himself as perhaps the outstanding holding midfielder in the game, winning the Champions League in his first season with the club and then being a key figure in Liverpool's first title win for 30 years in his second.

But the injuries to Virgil van Dijk and the rest forced Fabinho into the back line. The win over Southampton was only his fourth Premier League start of the year in midfield.

Liverpool have won them all.

It is not just that Fabinho brings greater protection when patrolling that area in front of the defence. There has been a knock-on effect elsewhere in midfield. Not only has Klopp been robbed of one key midfielder, the shift has diminished the impact of the others too.

Speaking to the Liverpool manager, he is well aware of the problem.

"We have to put another midfield player in a deeper position, then we miss them in a higher position. Whether it is Gini [Wijnaldum] or whoever."

Against Southampton, there was a trademark bit of Fabinho action in the 69th minute when he was there to block a shot from Kyle Walker-Peters on the edge of the penalty box.

"It is his quality, his spatial awareness," says Klopp.

"His being in the right spots and these kind of things."

But it was the moment just before that - in the 52nd minute - that highlighted what Liverpool have really been missing in their build-up play. Fabinho collected the ball deep inside his own half and fizzed a sharp pass forwards towards Thiago directly ahead of him.

It is the sort of pass that Gary Neville believes sets Fabinho apart.

"There are holding midfield players who just play horizontally, pass sideways, and they always shift this way and that way like they are shuttling across," Neville tells Sky Sports.

"But Fabinho plays vertically as well. He goes forward with his passes." 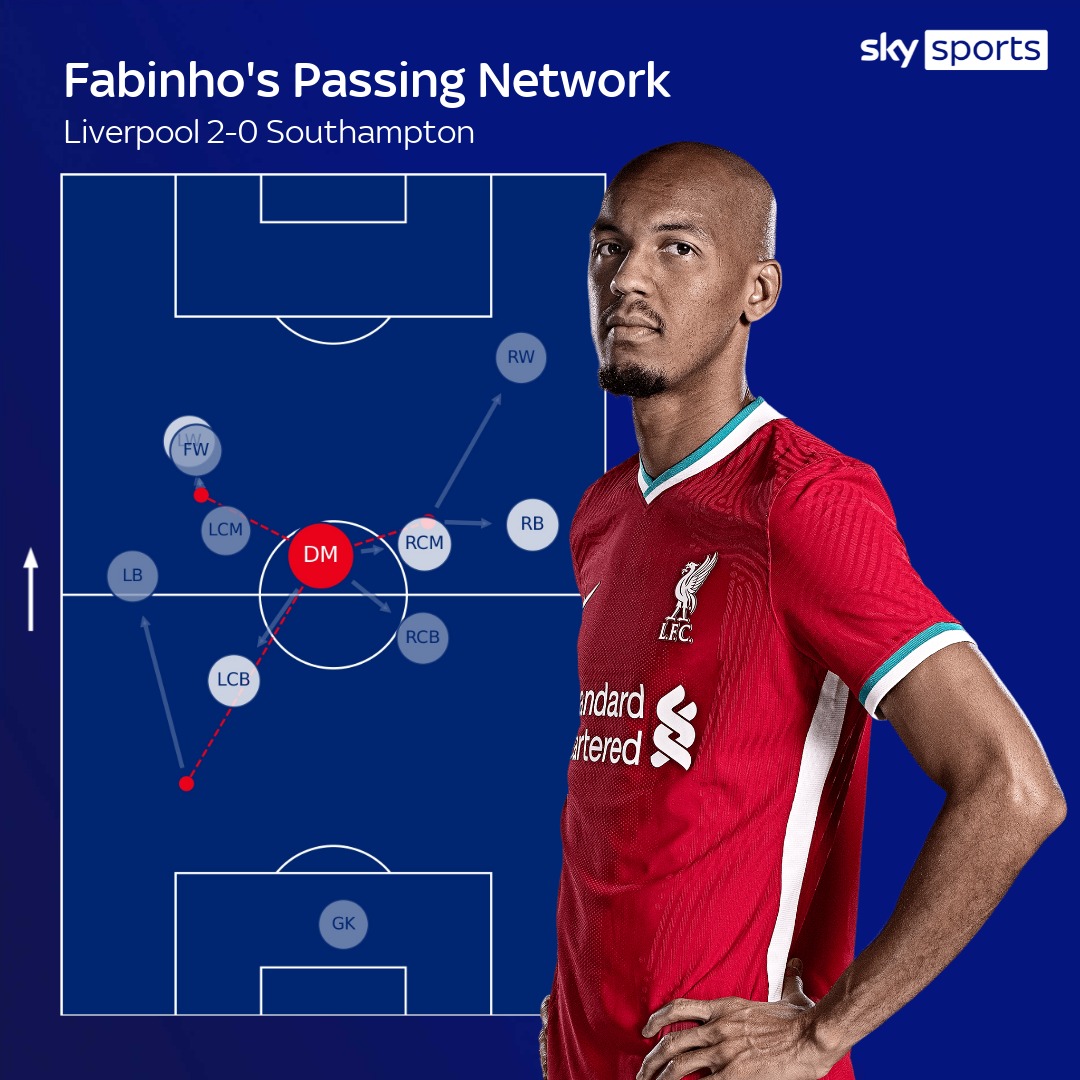 The consequences of that pass could be seen in what followed. Some ingenuity from Thiago cleverly took out two Southampton midfielders and unlocked the space for Wijnaldum. The Dutchman then carried the ball forward, driving at the defence. Liverpool were away.

The prompting of Fabinho from deep, the creativity of Thiago, and the running power of Wijnaldum. This was the Liverpool midfield functioning as it should, as had been intended.

Thiago has had some challenges this season, but at times he has been asked to play a role for which he was not earmarked. Wijnaldum has been shackled too. This was a reminder of their qualities. Qualities that are more apparent when Fabinho is in that holding role.

The effect can be seen in the results.

Since Van Dijk's injury against Everton, Fabinho has been out of the team on nine occasions with Liverpool losing as many as they have won. He has been in defence for 16 matches with his team winning only five - Fabinho no doubt missing a player like himself in midfield.

It is only those four matches that he has started in the middle, with only three alongside Thiago - all won to nil. Klopp is keen not to oversimplify but he has seen the numbers.

"We know that with Fab in midfield, we won the games.

"With him in defence, we did not win them.

"It is not that easy. If it was that easy, my life would be much easier, to be honest."

Klopp has had to make the calculation that the alternative options in midfield are superior to those at the back. To put it another way, he has often preferred to bench Rhys Williams and ask Fabinho and Thiago to adapt their roles than leave out a senior midfielder.

The temptation for much of the season has been to make do and mend, rework things, get the talent on the pitch. Fabinho is a capable defender, after all.

The problem is that a football team - certainly this Liverpool team at its best - is a living, breathing organism, with the potential to be better than the sum of its parts. Synergies happen all over the pitch. Take any piece out and there are unforeseen consequences.

With the benefit of hindsight, one wonders whether Klopp himself would acknowledge that utilising Fabinho's versatility - the obvious response to Liverpool's injury crisis - was the wrong call and that the route of minimal disruption would have been the better one.

"Believe me," says Klopp. "In the last few weeks, if we had other opportunities, we would have chosen them, this is clear."

And yet, after being an unused substitute for the draws against Leeds and Newcastle, Klopp opted to recall Williams to the starting line-up and move the man he once described as the best No 6 in the world back to that preferred position against Southampton.

Perhaps, belatedly, Fabinho is back in midfield to stay.