Sky Sports pundits Gary Neville and Jamie Carragher were united on Monday Night Football when they picked a Premier League winner and top four for this season but who have they gone with when it comes to top scorer, overachievers/underachievers, and golden boot winner? 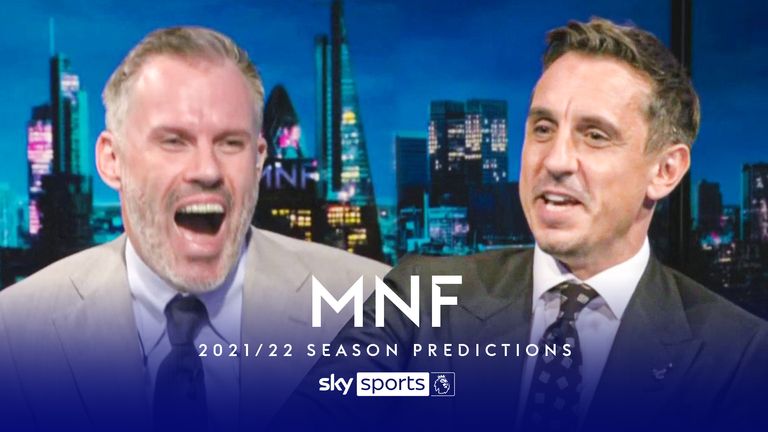 Speaking on MNF, Jamie Carragher and Gary Neville share their predictions for the 2021-22 Premier League season, including a difference of opinions on many matters!

Jamie Carragher and Gary Neville have made their Premier League predictions for the 2021/22 season - and both Sky Sports pundits are tipping Manchester City to successfully defend their title.

City suffered an opening weekend defeat at Tottenham but bounced back in style with a 5-0 thrashing of Norwich on Saturday and Neville and Carragher believe Pep Guardiola's side - who added £100m Jack Grealish to their squad and could move for Tottenham's Harry Kane in the final week of the transfer window - will be crowned champions again.

"Man City are Man City," said Carragher. "Liverpool are the one team who have broken their spell up, once in the last four years. It will take a lot to do that again. It will be really difficult to stop City if Kane went there. But if he doesn't, I think it is much more of a fight. I think Chelsea are involved and I think Liverpool are involved."

The pair are also agreed on the teams they expect to finish in the Champions League qualifying spots behind Manchester City, however there is a slight disagreement on the final order of the top four.

Carragher made the case for his order: "I don't mean to be disrespectful, I think the managers of the other teams have got the pedigree of top clubs, winning Champions Leagues, so I think managers do make a huge difference.

"I think Liverpool have a better team, a better manager, they only finished six points behind United last season despite having no centre backs for most of the season. And I think maybe Liverpool are going under the radar and some people - myself included - are forgetting how good they were for a couple of years."

Mohamed Salah and Romelu Lukaku are off the mark in the Premier League, with Salah scoring in Liverpool's opening 3-0 win over Norwich and Lukaku on target on his Chelsea return at Arsenal this weekend. Will one of those forwards take the golden boot at the end of the season?

Neville: "It could be Salah, it could be Lukaku, it could be Kane - and, to fair, you'd be guessing if you chose between the three of them."

Carragher on his overachievers, Brighton: "We have said so often how much we enjoy watching them play but can they finish? Certainly, in the opening stages of this season, they have been a lot more clinical than they have been in the past. You just hope with confidence, maturity, just that experience of playing in the Premier League, they will be able to finish off more of their chances."

Neville on his overachievers, Everton: "I've been clear I don't quite like the idea of the ex-Liverpool legend manager going to Goodison Park. Many Evertonians don't. But I've got no doubts about what he'll do as a performance. I think he'll make them have their best season for a long time. I think they could do what West Ham and Leicester did last season and get up to that fifth, sixth position."

Neville on his underachievers, Arsenal: "I think they've got a good young coach but at the moment I worry about the make-up of the squad, it doesn't feel right. That's not because they've lost their first two games. They've got a mixture of young players that you can imagine are committed, desperate to do well, have got talent, and then I think about the guidance I got as a young player at Manchester United, from unbelievable senior players in that dressing room, and I don't think they've got the right direction around them in that structure."

Carragher on his young talent, Emile Smith Rowe: "I think he has been outstanding, I loved watching him last season. Even though Arsenal have made a poor start to the season, he was arguably the best player on the pitch for the Friday Night Football. It is the way he moves with the ball. Very rarely do I see even the top players be able to receive the ball on the back foot on both sides, he can go with his left or his right. I am a huge fan of his."

Neville on his young talent, Kai Havertz: "I actually think Havertz has gone up a level but he is in third gear. He could go to fourth gear and to fifth gear. He could become an absolutely great player. When he really fills out, and he will do, he is already a great runner with the ball, but he will get more confidence, more belief and in a couple of years he could be someone who is absolutely there."

Carragher on his one to watch, Jadon Sancho: "I think he could be a superstar, I really do. You look at his numbers in German football. Gary has mentioned that they need this player on the right side, at times I think he is as good on the left if you look at his stats."

Neville on his one to watch, Raphael Varane: "I want to see how Varane does for Manchester United. I am intrigued to know how this World Cup winner with numerous Champions Leagues does. To see how he builds a partnership with Harry Maguire takes Paul Pogba off the one to watch."