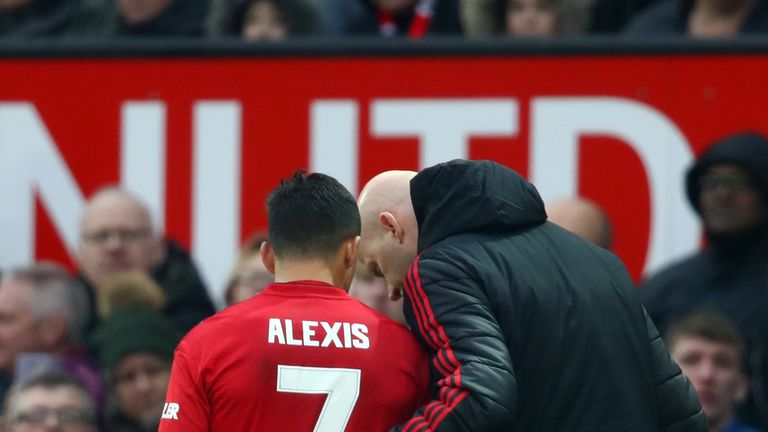 Alexis Sanchez will "hopefully" be fit for Manchester United's trip to Tottenham after suffering a recurrence of his hamstring injury against Reading, according to Ole Gunnar Solsjaer.

Sanchez, in his first start under Solskjaer, was replaced by Marcus Rashford 64 minutes into Saturday's 2-0 FA Cup third-round win at Old Trafford.

Speaking after the game, United caretaker boss Solskjaer said: "He was feeling his hamstring, he should've told me one minute before, though, because I made two subs.

"Hopefully he will be OK for next weekend. I think maybe he's happy that he got through 60 minutes. Hopefully he won't be too bad.

"He's been out a month now, he's had 20 minutes against Newcastle, half an hour maybe. Now he's had 60 minutes, so it's about building up again.

"You know the quality he has. I think maybe when he gets another few games under his belt, he would have finished a little bit earlier on in the first half.

"He had one touch too many, could have finished when he was driving through the box, so he'll be fine."

The Chilean forward pulled up during the game, grabbing his right hamstring, the same one which sidelined him for six weeks.

Sanchez had made his initial comeback as a second-half substitute in the 2-0 win at Newcastle on Wednesday.

Following Solskjaer's fifth successive win since his appointment, United will now travel to Dubai for a warm-weather training camp before playing Tottenham on Sunday, live on Sky Sports Premier League.

United progressed to the fourth round of the FA Cup with victory over Reading thanks to first-half goals from Juan Mata (penalty) and Romelu Lukaku - Sanchez providing the assist for the Belgian.