Manchester United manager Ole Gunnar Solskjaer says Paul Pogba is in a class of his own in world football when it comes to attacking midfielders.

Club record signing Pogba is one of a number of Manchester United players who has been revitalised under caretaker boss Solskjaer.

Apparently disaffected under Jose Mourinho, Pogba has been a dynamic presence under the new man at the helm, who is looking forward to unleashing him against Liverpool on Sunday.

When it was mentioned that Pogba was an unused substitute in the first match against Liverpool this season (a 3-1 United defeat), a smiling Solskjaer said: "He will play now!

"He is a top top player that I have always liked, since I saw him play as a kid.

"He is a World Cup winner, he is a leader in the dressing room, on the pitch as well. He wants the ball all the time.

"My idea was to get him playing to the best of his abilities. I thought, 'he is an attacking midfielder'.

"You saw PSG man-marked him (in the Champions League), other teams probably will.

"I don't know if Liverpool will. If they do, it may leave space for others - we need to be ready for that."

Asked how Pogba compares to other players of his type, Solskjaer added: "There are different types of midfielders but, in his mould, I don't think there is anyone near - with his physical presence, he can score goals, his close technique.

"He can also spray passes when he is sitting in midfield - I don't think that is his best position, but he can do that as well."

When it was suggested to Solskjaer that in Pogba and England forward Marcus Rashford he has two players to build around, he said: "They are young enough to stay here for many years, you hope.

"But you have (Nemanja) Matic and (Ander) Herrera that makes Paul's job the one it is - you have to complement each other. 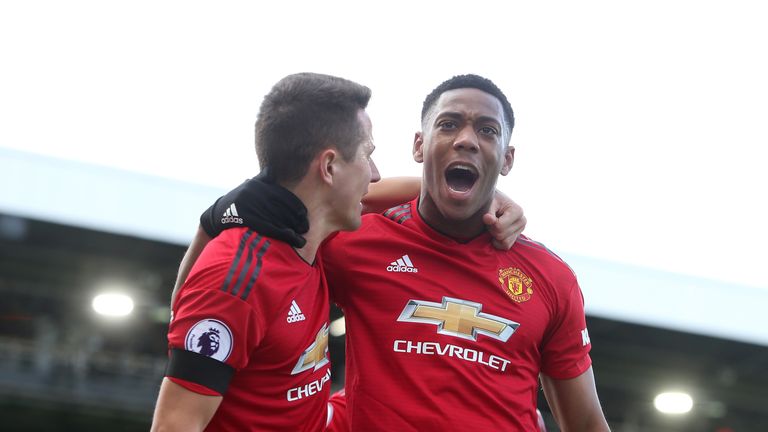 "You cannot just put out 11 Ronaldos or Messis on the pitch and think you are going to win a game.

"It is all about complementing each other's attributes and I think we have found a good balance in midfield here so far."

Solskjaer has been particularly impressed by Spain international Herrera and said: "He covers every single grass on the pitch - it is not his job but he does it when necessary.

"Against Chelsea for example (in the FA Cup on Monday), in the first minute he ended up almost left wing and winning the ball.

"We were sitting there, asking 'how has he ended up there? We want to see that on the video'.

"He has so much passion, energy and enthusiasm and he gives everyone around him that bit of extra - he has been through a good school with (Marcelo) Bielsa at Athletic Bilbao.

"He can play sitting midfielder, he can run, so it is about which one we decide for him."