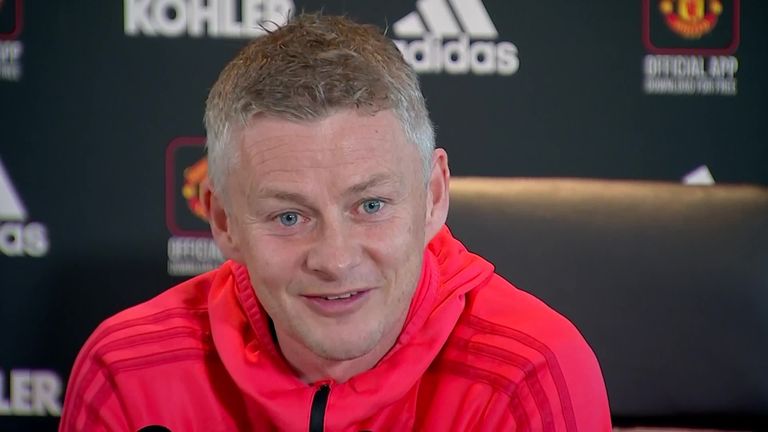 Ole Gunnar Solskjaer says James Garner, Angel Gomes and Tahith Chong will be in their squad to face Crystal Palace

Ole Gunnar Solskjaer believes Manchester United's youngsters are ready to make an impact in light of the club's injury crisis.

United could have up to 10 first-team players absent when they travel to Crystal Palace on Wednesday, leaving Solskjaer with no option but to bolster his squad by promoting talent from the club's youth teams.

"They've been part of our training for a long time now," Solskjaer revealed at his pre-match press conference on Tuesday.

"Angel has been in that successful England U17 team, with (Jadon) Sancho and (Callum) Hudson-Odoi and (Phil) Foden, so he's been a big part of that. I'm definitely sure that if he gets a chance he'll do well.

"Jimmy Garner, he's a Michael Carrick but 20 years younger, so I'm sure he'll do well, and Chong, he'll definitely be taking people on if he comes on."

Garner, 17, has yet to make his first-team debut for United, but his fellow England youth international Gomes, 18, became the first player born in the 2000s to appear in the Premier League when he came on during the final game of the 2016-17 season.

Chong made his debut in the FA Cup third round against Reading last month and has been capped at U21 level by the Netherlands.

Solskjaer believes the fact that all three of the youngsters are attacking-minded players will enable them to enjoy their opportunity if they make it onto the pitch, with United looking to close their one-point deficit to fourth-placed Arsenal.

"They're ready, they're kids," Solskjaer said.

"It's hard when you're a defender coming on, if you're 16, 17, but as an attacker you just go out there and express yourself and there's your chance.

"They can win you the game, they don't lose it for you."