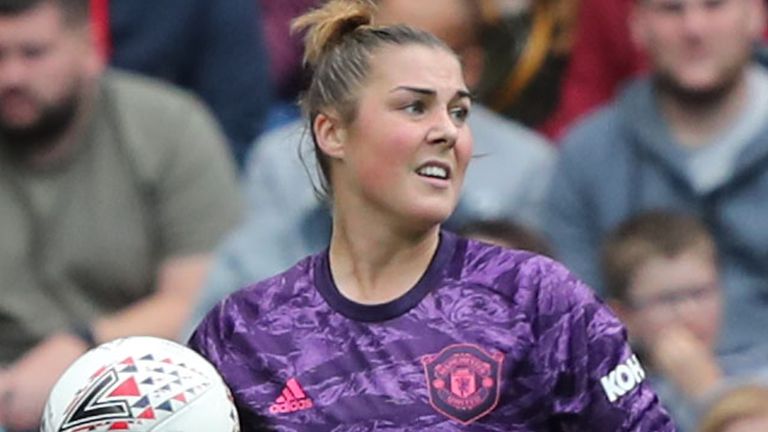 Manchester United Women are equipped to become a "European giant" within the next five years, according to goalkeeper Mary Earps.

The 26-year-old, who quit Wolfsburg to join United ahead of their first season in the Women's Super League last summer, thinks the club are moving in the right direction.

United, under Casey Stoney are fourth in the table after 12 matches, and Earps is confident they can continue to grow.

"I don't think we're that far away, to be honest with you," Earps said.

"Of course Wolfsburg is an unbelievable team, one of the best in Europe and has some incredible players.

"We've got some really great players here and I think especially what the club are looking to do moving forward, I think it can be a European giant in five to six years.

"I've said it before and I'll say it time and time again. That was a big reason why I came.

United host Chelsea on Sunday looking to make amends after two 1-0 defeats to Emma Hayes' side in the league and WSL Cup earlier in the campaign.

But Earps thinks the setting of high standards has been pivotal to how quickly they have adapted to the demands of the top tier.

"I've said before that one of the real refreshing things about this team is that there is sort of a bit of fearlessness there," Earps said.

"We also have really high standards and there is that growing expectation with the vision and the ambition of the club."

The England international also pointed to their performances against the top three, Manchester City, Chelsea and Arsenal, as a barometer of how close they are to beating the WSL pace-setters.

Earps said: "The top three are really strong on their day. We've obviously played City a few times already this season and beaten them so I don't think we're that far away.

"We played Chelsea away at Kingsmeadow and it was 1-0, we played them here at Leigh and it was 1-0, they're really tight games and I think it should give us confidence that we can go toe to toe with the best."