You can listen, watch and read the full Off Script episode with Neville discussing where it all went wrong at Valencia across our Sky Sports platforms from 12pm 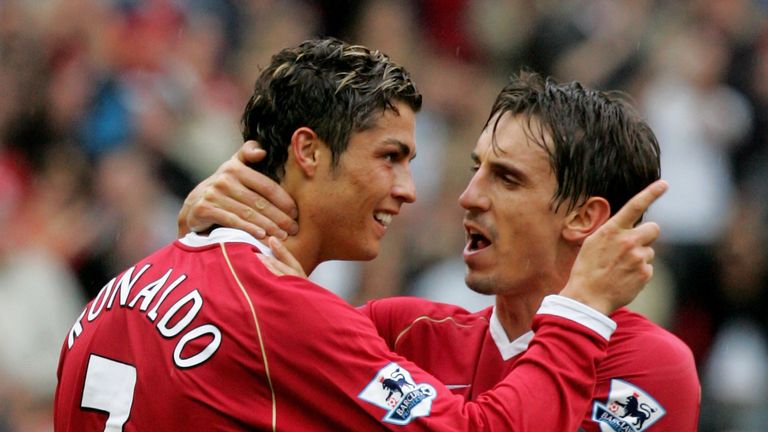 In a special edition of Off Script, Gary Neville explains to Geoff Shreeves how he kept the grass long and dry which rattled Cristiano Ronaldo

Gary Neville reveals Cristiano Ronaldo called his pitch at Valencia "a disgrace" after he failed to water or cut the grass ahead of their clash with Real Madrid.

Neville swapped the TV studio for the touchline in 2015, spending four months managing Valencia where he came up against Ronaldo when Madrid visited the Mestalla in one of his first games in charge.

In one of only a few positive memories from his unsuccessful stint in Spain, Neville guided his team to a 2-2 draw against 10-men Real where he managed to keep Ronaldo quiet for large periods.

Neville admitted his former Manchester United teammate wasn't happy with his decision to tactically slow the pitch down by not watering or cutting it in the build-up to the match.

Speaking on a special hour-long Off Script regarding his time at Valencia, Neville revealed: "The 2-2 draw with Real Madrid where we almost won it late on was an incredible night.

"Rafa Benitez was Madrid manager and that was his last game before he got sacked. What I remember most about that game was our tactic of leaving the grass really long and we didn't water the pitch so the ball wouldn't travel as quick in the hope of slowing down Cristiano Ronaldo and Gareth Bale.

"Cristiano came over to me before the game and said 'it's a disgrace, cut the pitch' - I said 'absolutely no chance'.

"There was no way he was dribbling that night."

You can listen, watch and read the full Off Script episode with Neville discussing where it all went wrong at Valencia across our Sky Sports platforms from 12pm.