Cesc Fabregas has hailed Chelsea’s character after they bounced back from a weekend defeat to beat Manchester City 2-1 on Wednesday.

The Spain midfielder admitted the Premier League leaders had been feeling the pressure after their surprise 2-1 loss at home to Crystal Palace on Saturday but they responded in the best possible fashion with victory over City at Stamford Bridge.

Tottenham's late rally to win at Swansea meant victory for Antonio Conte's side was all the more important as they maintained a seven-point advantage with eight games to play and Fabregas insists his team have the character to finish the season with a flourish. 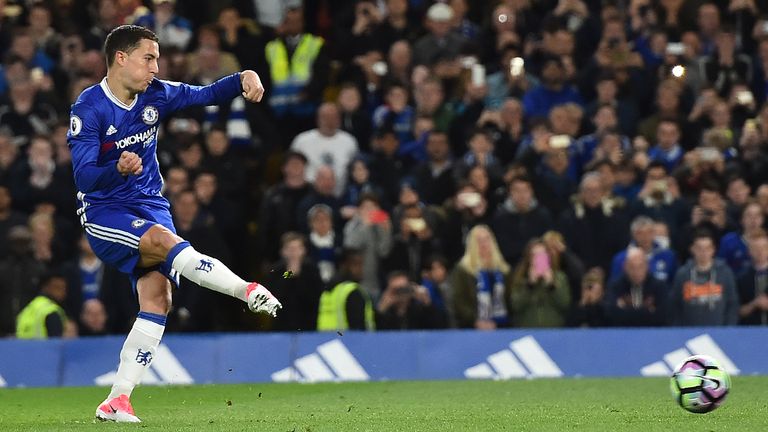 "It was a massive game and thankfully we won," Fabregas told Chelsea TV. "The result on Saturday put a lot of pressure on us. We know we still have a good advantage, but this is the Premier League and you don't want to be giving points away, especially at home.

"We have character. We can bounce back at anything that comes in front of us. It wasn't the most pretty game from us, but it was a very consistent performance.

"We knew what we were doing, we had a game plan and I think it worked perfectly."

Conte is working on the assumption Tottenham will win all of their eight remaining games, so Chelsea must claim 18 points, or six wins from their final eight league games, with the Blues travelling to Bournemouth on Saturday next.

Fabregas added: "We've been saying it since the beginning of the season: it's one game at a time. We have to worry about ourselves, not what the others are doing.

"As long as we keep winning then we don't have to worry."

Eden Hazard scored twice against City, underlining his importance to Chelsea. The 26-year-old playmaker has been linked with a move to Real Madrid in recent weeks, but he has insisted he is happy at Stamford Bridge.

His Belgium and Chelsea team-mate Thibaut Courtois has also been linked with a move to the Spanish capital, but reaffirmed his commitment to the Blues.

"Eden is not affected by it. They are just rumours. He is just calm. He knows that he is important to Chelsea, like I do," he told the London Evening Standard.

"We are both very happy to be here. This was my 100th game for Chelsea and I hope for many more. Eden is one of the best players in the world. Chelsea have ambitions to win the Champions League again and always look to play for the title.

"If you want to do that, you need the biggest players and he is obviously a big part of that."