It was around 4.30pm on a Saturday afternoon in November 2007 when a game at the Stade Marcel Picot was slipping away from Lille.

Nancy had just scored a second and so, with just 12 minutes to play, a manager with a reputation for giving young players a chance decided to roll the dice. Taking off Kevin Mirallas, and, in his place, handing a talented 16-year-old his professional debut.

It didn't work, at least in the short term. Lille lost 2-0. But the teenager was Eden Hazard and, a decade on from the day his debut ended in defeat, we now know something spectacular had started.

"At the end the manager told me, 'Unfortunately we lost the game but today is a special day for you'. I was proud," says the now 26-year-old Hazard, recalling his breakthrough from the no-expense-spared surrounds of Chelsea's Cobham training ground.

"For me it was just a dream. I left Belgium at 14, two years later I made my debut for Lille. For me that was normal because in my head I knew I could play for Lille one day. I just enjoyed my time. Now, 10 years on, I am just happy with what I did."

The manager who rolled the dice is also a name we're now familiar with in the Premier League.

"It was Claude Puel," says Hazard with unmistakable enthusiasm. "He was fantastic, one of the best. He gives chances to young players.

"Sometimes now in football, managers are scared to use young players. He did well, not just with me, but with a lot of players. For young players, he is a good manager."

Five years after his debut, Hazard faced Nancy again, scoring his first professional hat-trick in what proved to be his final game for Lille. In between the two matches he was named Ligue 1's Player of the Year on two occasions and inspired Lille to a League and Cup double.

Established as one of Europe's elite young players, Hazard could have gone anywhere. He chose Chelsea and, after a year under Roberto Di Matteo and Rafael Benitez, Jose Mourinho returned as manager.

"When Jose came he tried to make me one of the best players in England and I think he put this in my mind, that it was possible," Hazard added. "I started to realise that if I'm playing well in every game I could be one of the best."

But when you meet Hazard you realise that is where he and Mourinho differ. Sure that he could be the best, Mourinho always wanted more from his star player.

In truth, so did some of his coaches and team-mates in his early days at Lille. Even Hazard's father hoped the Portuguese manager could give his son 'a little more ego'.

That's not Hazard though. He loves playing football and enjoys his family, often bringing his three sons to the training ground at Chelsea.

But he's not relentlessly driven to be the best. In fact, even though he's one of the few people of the planet with at least a chance of one day being the best player in the world, it doesn't really interest him.

"I am more about enjoying the game," he said. "I try to be the best, if I am not it is not a problem for me. I just want to enjoy being on the pitch. I know sometimes in football you have tough moments so I try to stay on the same level. It's not in my mind to be the best.

"I feel now football is more about statistics, about scoring goals, making assists. That's why people want to see me scoring more goals. On the pitch, people think I'm good but when we win 1-0 or 2-0 they want to see Eden scoring two goals, Eden making one goal and creating an assist.

"People think about statistics every time but in my head if I am not scoring goals it is not a problem as long as we are winning."

Player of the Year in Mourinho's final title-winning campaign at Stamford Bridge, Hazard's form then deserted him as the Portuguese was sacked amid rumours the relationship between the manager and his players had soured the following season.

"I don't know why," says Hazard when I ask about the dip in form he suffered as Chelsea unravelled. "I think every player - maybe managers and staff - we have a responsibility in this bad period.

"As a player I try to forget, I live in the present. It was a bad year for us with Jose, I was feeling bad for him but football sometimes is like this. You need to keep playing and smiling and then the year after we won again."

Now though, they look like a side in the midst of another dip. Hazard admits there are similarities.

"It is similar because the year before we won the title and then it is different, it is a little more complicated," he revealed, before dismissing rumours of player discontent. 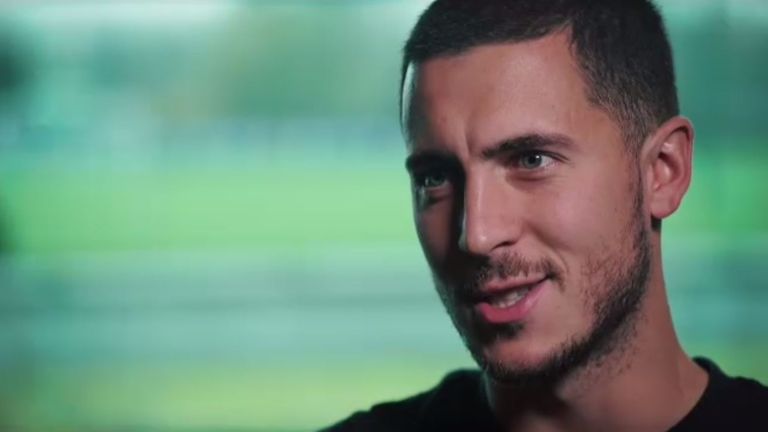 I am more about enjoying the game. I try to be the best, if I am not it is not a problem for me. I just want to enjoy being on the pitch. It’s not in my mind to be the best.

"We just want to play, to be happy on the pitch. I don't see people sad in training. We are all happy, we just want to win games.

"In football when you win games you are happy. Sometimes in bad moments you lose games - people can be a little bit sad but we are professionals. We have the experience from two years ago so now we want to be better."

Now, on Nissan Super Sunday, Hazard and his team-mates prepare to face their former manager and they know Mourinho will arrive at Stamford Bridge with a plan not just beat Chelsea but to stifle him.

"I don't know their strategy but I remember last year at Old Trafford, so maybe yes [Mourinho will have a plan for me]," Hazard said. "But if that happens I need to find a solution to shine.

"Last year at Old Trafford I didn't find it so I hope we can find it - not just me but our 11 players - so we can win this game."

After a decade, almost all of it at the top of the game, Hazard is still only 26. There's still so much to come, or is there? His answer to what's next also reveals a man whose thirst is for life and not just for football.

He said: "I don't know, we will see. I live in the present so for the moment I feel good, my body feels good. I am happy with what I'm doing, I will see.

Maybe he'll never be the very best, maybe we won't get to enjoy him for another decade. But at this very moment, Eden Hazard has what it takes to destroy Manchester United on Sunday. And Jose Mourinho knows it.