Athletic Bilbao have announced Kepa Arrizabalaga's £71m buyout clause has been met - bringing his move to Chelsea a step closer.

In a statement on their website, Athletic confirmed Arrizabalaga's release clause had been activated and his contract terminated - although there was no mention of Chelsea.

The 23-year-old is now expected to travel to London to undergo a medical and discuss personal terms ahead of a switch to Stamford Bridge.

"The Professional Football League has certified to our entity that the player Kepa Arrizabalaga has met the requirements for the valid unilateral termination of the work contract that linked him to Athletic Club," the statement read. 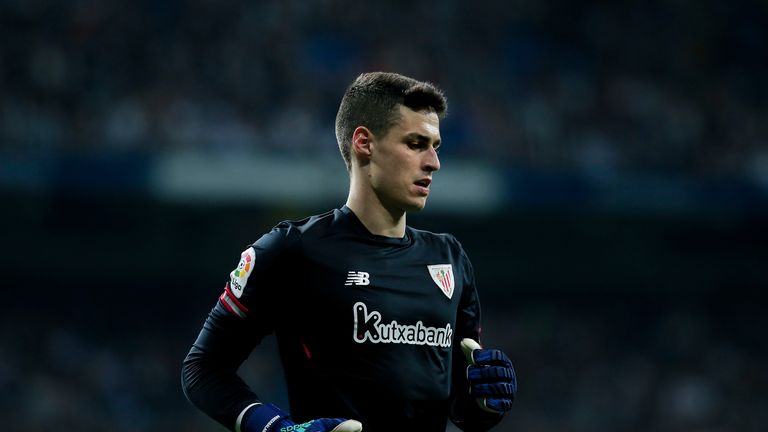 Chelsea boss Maurizio Sarri admits he is impressed by Kepa

"The aforementioned certification indicates that the player has expressed his desire to terminate and unilaterally resolve the relationship that joined him since the 2004/05 season and that the amount of the compensation established in the contract has been deposited.

"Athletic thanks the player for his contribution during the time he has remained in our club."

Who is Kepa Arrizabalaga?

We profile Kepa Arrizabalaga as the Spanish goalkeeper edges closer to a big-money transfer to Chelsea...

Chelsea confirmed on Wednesday evening they had reached an agreement with Real Madrid for the transfer of Thibaut Courtois.

Sky sources in Belgium understand Real are expecting Courtois to arrive in Madrid on Thursday ahead of completing his switch to the Santiago Bernabeu.

Courtois, who has less than year remaining on his current contract at Chelsea, did not report back for training on Monday after being given extra time off following the World Cup.