David Luiz has praised "great human" Maurizio Sarri as Chelsea continued their flying start to the Premier League season with a dominant win at Burnley.

Chelsea have dropped points to Burnley in each of the last two seasons but triumphed 4-0 at Turf Moor, with Alvaro Morata, Ross Barkley, Willian and Ruben Loftus-Cheek on the scoresheet.

The Blues are unbeaten in all competitions this season aside from the Community Shield and much of the credit has gone to former Napoli boss Sarri for his transformative effect.

Luiz said: "I'm so happy because he's a great human, he knows how to teach us, he knows how to improve us. When it's like that it's easy to understand and easy to try to be a fantastic player inside the pitch."

The Burnley victory and performance was particularly impressive considering it came without their talisman Eden Hazard, who is sidelined by a back problem.

"I think we have many talented players, it's not just Eden," said Luiz. "We lost Pedro (to illness), and then Ruben came on. This is a big club and we cannot just play with 11 players. (We need a) minimum of 18, 19 players ready to play and we are happy because we have more than 20." 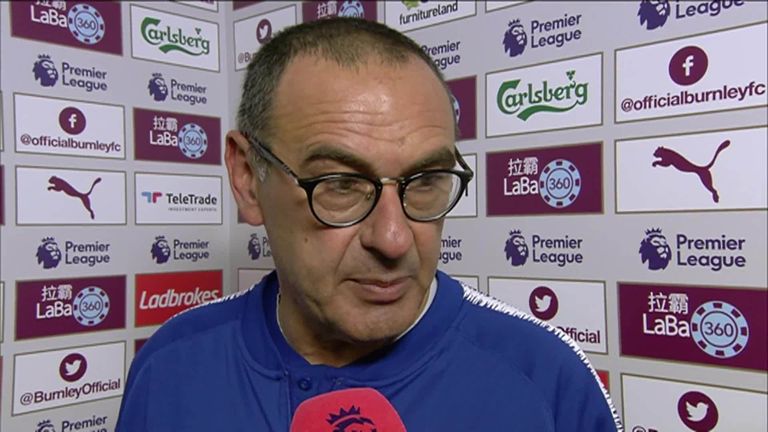 Barkley has been the player most transformed under Sarri and scored for a third game in a row, while the much-maligned Morata was a constant threat to the Burnley defence and should have scored more than one goal.

Having scored only once in his first nine games of the season, the Spaniard has managed three goals in his last four, and Luiz said: "Alvaro is a great player, he's doing amazing.

"Sometimes when the strikers don't score the pressure starts on them. They love to score goals. I would just say to him to keep doing what he is doing and the goals are going to come naturally like they came against Burnley."

Luiz has already won three major honours with Chelsea, including the Premier League two seasons ago and the Champions League in 2012, but he knows it is far too early to start talking about what might happen, particularly given the competition from Liverpool and Manchester City.

He said: "I had the opportunity to play in many fantastic squads, I won with great teams but also lost with great teams. I think with this team it's trying to improve every single day.

"The manager is here for three or four months now so he's trying to improve our style of football, our philosophy. The Premier League is not easy but it's just the beginning. We're keeping our feet on the ground."