Chelsea are keen on signing Gonzalo Higuain from AC Milan in a swap deal with Alvaro Morata, according to Sky in Italy.

It is understood Blues boss Maurizio Sarri has huge respect for Higuain, who he worked with at Napoli and was interested in bringing to Chelsea in the summer.

Sky in Italy understands Morata is keen to return to Italy having previously spent two years with Juventus where he won two Serie A titles and two Coppa Italias.

However, the deal would be complicated by the fact Higuain is on loan at AC Milan from Juventus.

Higuain scored 36 league goals in the one season he worked with Sarri before leaving the San Paolo to join Juventus.

He was linked with a move to Stamford Bridge in the summer but joined Milan in a £16.3m loan deal, with the club having an option to buy him permanently for £32.6m.

At his news conference on Friday, Sarri called Higuain a "wonderful player" but refused to discuss a potential move for the Argentina international.

"As you know, I like him very much. He is a wonderful player, a wonderful man," Sarri said.

AC Milan head coach Gennaro Gattuso does not believe the 31-year-old, who has scored seven goals in all competitions so far this season, will move to London.

"Chelsea don't buy players who are 30, 31 years old. I don't know anything about it, I will not let Higuain go," said Gattuso. 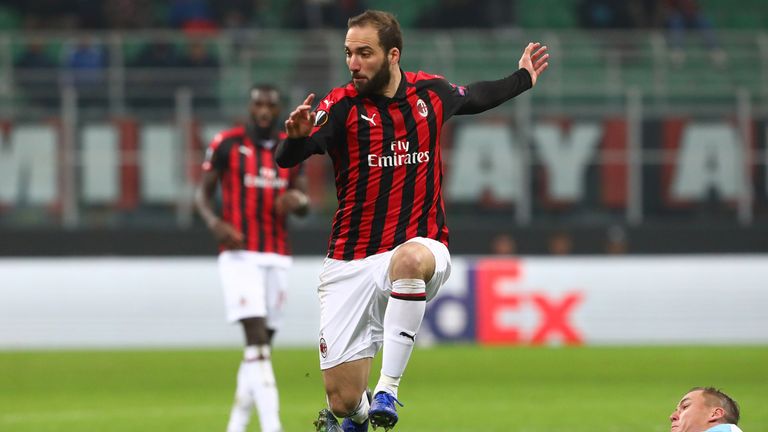 "We do not talk about his contractual issues or about what he speaks of with his agent or with our board.

"We talk about football, which is the most important thing.

"And in this moment for him it is not easy to accept that he has been finding it difficult to score goals."

Chelsea have deployed Eden Hazard as a false nine on a number of occasions this season, with Morata struggling for form and Olivier Giroud scoring just once in the Premier League.