Who are Chelsea targets Nicolo Barella and Leandro Paredes?

Who are Chelsea targets Nicolo Barella and Leandro Paredes? Would they fit at Stamford Bridge? We profile the midfield pair.

Sky sources understand that Chelsea are close to deals for both Cagliari's Barella and Zenit St Petersburg's Paredes.

They would be replacing veteran midfielder Cesc Fabregas, who is set to join Monaco, although he will only be allowed to leave in January if Chelsea can land a replacement.

But who are Barella and Paredes, how do they play and would they fit in at Stamford Bridge? We take a look...

The story so far

Barella has spent his entire career at Cagliari, coming through their youth ranks before making his first-team debut in May 2015. He spent time on loan at Como in 2016 but has become a key player for his boyhood club since then, starting each of the 18 Serie A games he has played in this season, and only missing one through suspension.

It's a similar story for Paredes, who has started each of the 15 league games in which he has featured for Zenit this season, and only missing out twice through suspension. The Argentina international also spent time in Serie A previously, playing for Chievo, Roma and Empoli before moving to Russia in July 2017.

He has a better record in front of goal, too, scoring three goals in the Russian Premier League with two assists, compared to just the one goal and no assists from Barella, who says he is proud to be linked with big clubs, including Manchester United and Arsenal as well as Chelsea.

In an interview with Gazzetta dello Sport in September, he said: "The interest from big clubs is pleasing, and makes me proud. It means I'm doing the right things."

Barella has plenty of versatility and is capable of fulfilling various roles in the middle of the park. He has been deployed as an attacking or defensive midfielder in the past, but his favoured role is thought to be as a traditional central midfielder.

There has been plenty of praise for the 21-year-old, with Cagliari manager Rolando Maran recently telling Gazzetta dello Sport: "In Italian football, a player's technique must be predominant but you also need to have a good engine and Nicolo combines both of these things.

"He is exceptional and has a dynamism out of the ordinary. He is a prototype of a modern football player, he has many qualities... I think he can do really well anywhere. I must admit that I did not expect to be in charge of such a strong player, I have not seen a player as influential player as him this season in Serie A."

Paredes, meanwhile, is less versatile but still an excellent midfielder who often drops back to play as a deep-lying playmaker, prompting comparisons with Xabi Alonso. He expertly links the defence and attack together with smooth, incisive passing and also possesses a dangerous shot.

According to WhoScored.com, he has made an average of 61 passes per game this season - the fifth highest in the Russian Premier League. He has also registered the fourth highest pass completion rate (87.5 per cent) and tops the table for the average number of crosses per game (2.1).

Would they suit Chelsea?

Manager Maurizio Sarri has spoken of his need for more midfielders when Fabregas leaves, saying: "If Cesc goes of course we will need a replacement... Without Cesc we are only five so we are in trouble. We need a replacement of course."

With Barella's versatility, there could be room for both him and Paredes at Chelsea.

Barella would be heading to Chelsea to work with another Italian in Sarri, while his assistant Gianfranco Zola also has strong links with Cagliari, having previously played and managed at the club.

He has also spoken about his love for the Premier League and its style, telling Gazzetta dello Sport: "If I had to choose between the Serie A and the Premier League, I would go for England because I love the way they approach the game. Plus everyone there is just as irritable and prone to fouls as me!"

Paredes is arguably a more like-for-like replacement for Fabregas, not moving far from that deeper midfield role at Zenit, and he is also more experienced than Barella. 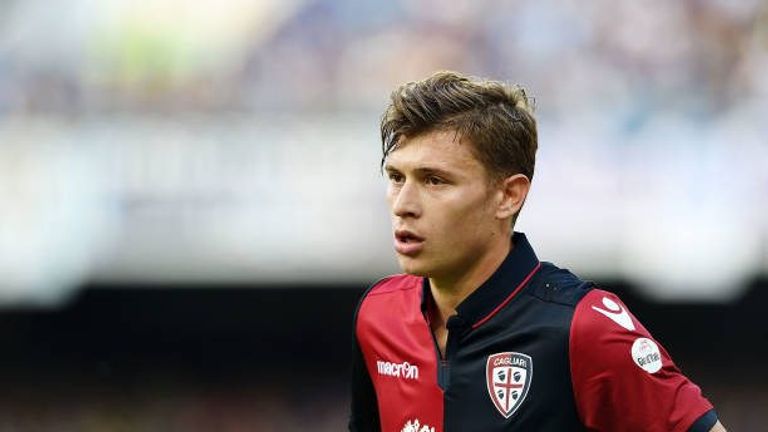 "If I had to choose between the Serie A and the Premier League, I would go for England because I love the way they approach the game. Plus everyone there is just as irritable and prone to fouls as me!"

Nicolo Barella on playing in the Premier League

Of course, there is already plenty of competition in Chelsea's midfield, with Jorginho, N'Golo Kante, Ross Barkley and Ruben Loftus-Cheek just some of the options available. Whether either player would go straight into the team remains to be seen, but they would need to adapt quickly.

Barcelona midfielder Denis Suarez has also been linked with a move to Chelsea, although he is expected to join his former manager Unai Emery at Arsenal.

Mateo Kovacic could also join Chelsea on a permanent deal from Real Madrid but, despite performing well under Sarri so far, it is unlikely it would go through in January.