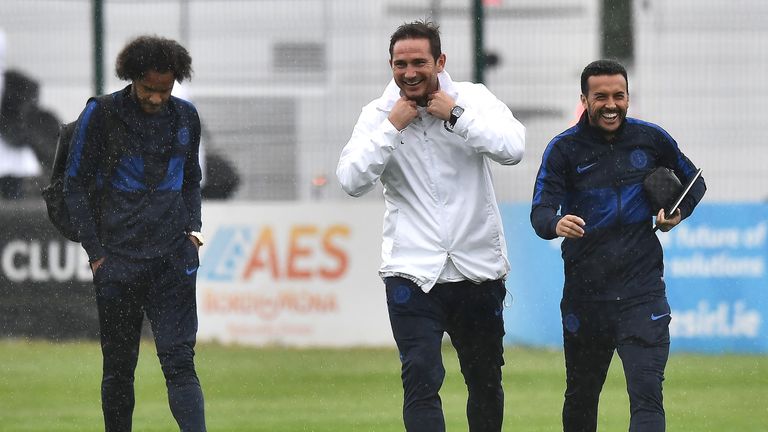 Pedro says it 'very good to work' under new Chelsea head coach Frank Lampard, who the winger describes as 'a legend at the club'

Pedro says it is "very good to work" under new Chelsea head coach Frank Lampard, who he described as a "legend at this club".

Pedro featured in the first half of Lampard's first game in charge of Chelsea - a 1-1 draw at Irish side Bohemians in which the new Blues boss used 22 players.

Lampard has had less than a week on the training ground with his players, but Pedro says the former Derby boss is already getting his ideas across.

Asked for his verdict on the first few days of Lampard's reign, he told Sky Sports News: "It's very hard work, high intensity, pressing a lot without the ball. When you have the ball move it quick.

"For us it's very good to work with Frank. He's a legend at this club. Also his coaches are very good with good ideas."

Chelsea were denied victory in Lampard's first game by a late Eric Molloy goal for Bohemians, but Pedro believes failing to beat the League of Ireland side is no cause for concern.

"It's normal for the first game of pre-season," he said. "It's only five days of training and for this reason it's normal to draw.

"We need to improve a lot but it's good to be on the pitch and have the young players as well.

"It's normal to not be in the best condition. We've been training really hard with Frank this week and this is good for us."