Chelsea midfielder Eden Hazard has been named the PFA Player of the Year.

Hazard, 24 and last season’s Young Player of the Year, has scored 18 goals in 47 games for the Blues this season, inspiring the current league leaders to the brink of a first Premier League title since 2010.

Having impressed at the World Cup with Belgium, Hazard started the season strongly and then scored four vital goals in a bullish run of form through December.

More recently he has scored five goals in eight games, including the winner in a thrilling 1-0 victory over Manchester United on April 18.

Hazard was rewarded for his sterling performances with the top individual award of the night at the PFA's awards ceremony at the Grosvenor Hotel in London.

He finished ahead of Tottenham striker Harry Kane - the Young Player of the Year - and Manchester United goalkeeper David de Gea in the vote by his fellow professionals.

Hazard said: "I'm very happy. One day I want to be the best and what I did this season is play very well, Chelsea played very well.

"I don't know if I deserve to win but it is good for me. It is good, it is better to be voted by the players - they know everything about football. This is good. I'm very happy.

"We are almost champions, maybe this is the key. Last season we finished third and this season we have an opportunity to win the league. This has changed from last season.

"I continue like I did last season - I try to be the same. I try to score more goals than last season. Personally I have played a good season, I have been there in the big games and I scored a lot of important goals, this is why I'm better this season.

"I started the season not to be the PFA Player of the Year but it was in my head - I want to be the best and I hope one day I can win a lot of trophies. 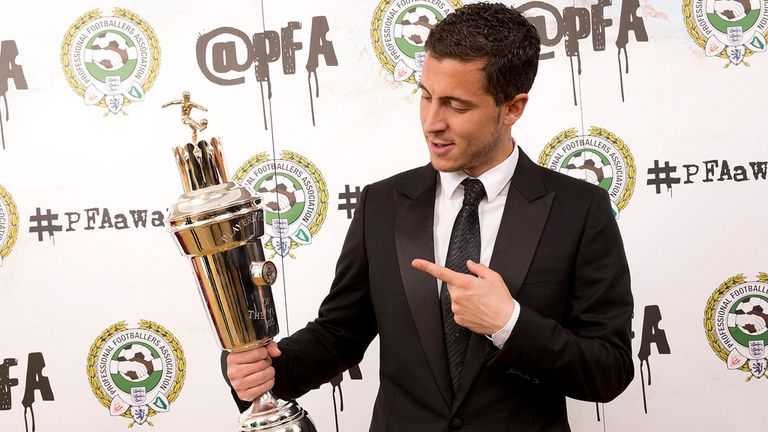 I have played a good season, I have been there in the big games and I scored a lot of important goals, this is why I'm better this season.

"I just want to say thank you to the players who voted for me - it is always good to have an individual trophy but the most important thing is to win the league.

"I hope I can win a lot of trophies again - the most important is to win the league, without my team-mates I would not be here.

"Jose (Mourinho) lets me play, we talk sometimes together and when I'm on the pitch I know what I have to do, this is most important."

Hazard was also named in the PFA Premier League Team of the Year - for the third time in his three seasons in England.

He was one of six Blues players in the XI, along with captain John Terry, Gary Cahill, Branislav Ivanovic, Nemanja Matic and Diego Costa.

South Korean midfielder Ji So-yun made it a Chelsea double by taking the Women's Player of the Year award.

She said: "It is a big honour to receive this award - I want to thank Chelsea Ladies' players and staff.

"I'm really, really happy to be nominated alongside Hazard, I'm really proud of myself and Chelsea, and the Chelsea Ladies team."