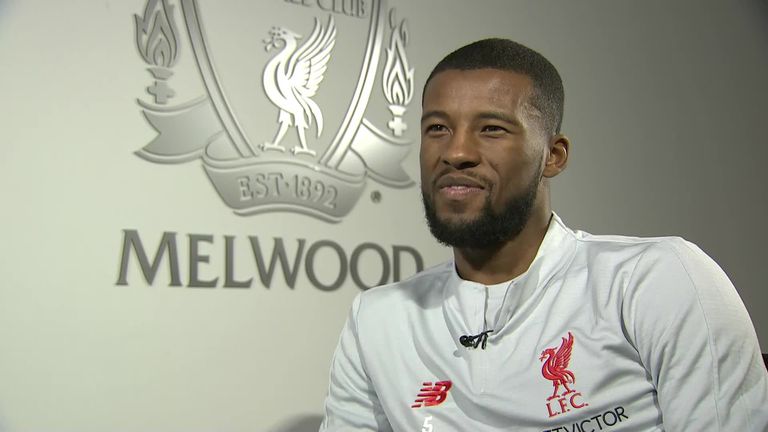 Georginio Wijnaldum says Liverpool believe they will win the Premier League title, but he admits Manchester City's players will be feeling the same way

Georginio Wijnaldum has told Sky Sports that he thinks it would be "stupid" for Liverpool not to believe they will win the Premier League.

With the Reds four points clear of Manchester City at the top of the table and having bounced back from their first loss of the season - to their title rivals - with a win at Brighton last weekend, Wijnaldum said "it would be a bad sign" if Liverpool did not believe in their ability to hold out.

In the past decade, every team leading the pack at Christmas has gone on to lift the Premier League trophy at the end of the season, with the exception of Liverpool, who finished second in 2008/09 and 2013/14.

Wijnaldum told Sky Sports the Reds are confident they will not add to that unwanted record this season, although he has urged his team-mates to focus on Saturday's clash with Crystal Palace.

"I think it would be stupid if I said 'no' [I don't think we will win]," he said. "If you ask people from Manchester City 'will they be champions?', they'll say 'yes'.

"I'd prefer to speak about games, like now against Crystal Palace, than about the championship. We just want to make the season as good as possible.

"We are trying to give everything during the season and hope we will succeed in the season. When we look back at the end of the season we will say, 'Ok, what we have right now, we gave everything to reach that'."

Liverpool take on Palace at Anfield on Saturday almost 24 hours prior to second-placed City visiting Huddersfield, with the latter live on Sky Sports Premier League from 12.30pm on Sunday.

The pressure will once again ramp up on City if they are seven points off the pace prior to kick-off at the John Smith's Stadium, if Liverpool win the day before.

Wijnaldum faced a similar situation when he was a PSV player and they lifted the Eredivisie title ahead of Ajax in 2015 - and said playing first could act in Liverpool's favour.

He said: "It's difficult to say. I had the feeling it felt like an advantage when I was at PSV, we felt like we were putting pressure on them whenever we won a game, but we were not thinking we have to win today to put pressure on Ajax.

"We went out, tried to enjoy it and win the game - and we won nearly every game so it worked well. We concentrated on our own game, that's the only thing you can control."