James Milner expects a response from Manchester United in Wednesday's derby with Manchester City following their 4-0 drubbing at Everton.

United will put Liverpool in control of their own destiny in the Premier League title race if they take points off Pep Guardiola's side - the Reds are two points clear of City at the top but have played one game more.

Milner will not be tuning into events at Old Trafford but he believes City could face a backlash against their rivals, who have lost six of their last eight games.

Why Sterling has my vote

Adam Bate explains why he has voted for Raheem Sterling as the FWA Footballer of the Year.

"I won't watch the game," Milner told Sky Sports. "Obviously you need to know what's happened as the result has a big impact on us.

"Manchester United aren't having the best of times at the moment but after the result the other day [against Everton] - I'm sure they'll want to respond to that. 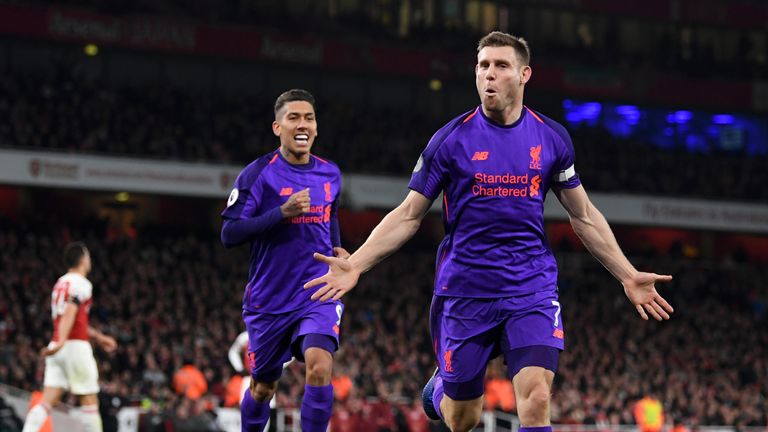 If the phone is deathly quiet I'll know City are doing well.

"It'll be an interesting game for sure but it's not one that I'll probably watch.

"I think I've got a charity meeting tonight so I'll be well away from the box. I'm sure I'll get messages and things like that.

"If the phone is deathly quiet I'll know City are doing well.

"We just want to concentrate on our business. That's what we can control. We can't control United or City.

"From a football fan's point of view, knowing what a big club Manchester United is, you'd expect them to respond after a 4-0, but I can't control that.

"I'm sure it'll be a great game to watch. Manchester derbies are always special, I've been lucky enough to play in a few."

Milner won two Premier League titles, an FA Cup and League Cup during his five seasons at City but denies the prospect of pipping his former side to the title is providing any added incentive.

"I had good times at Manchester City, I enjoyed all of my time there and was lucky enough to win trophies," he said.

"To be up there challenging them, with the points total we have, shows what a strong team we are and how much we've improved.

"It's good that we're pushing them but we want to get over that line."