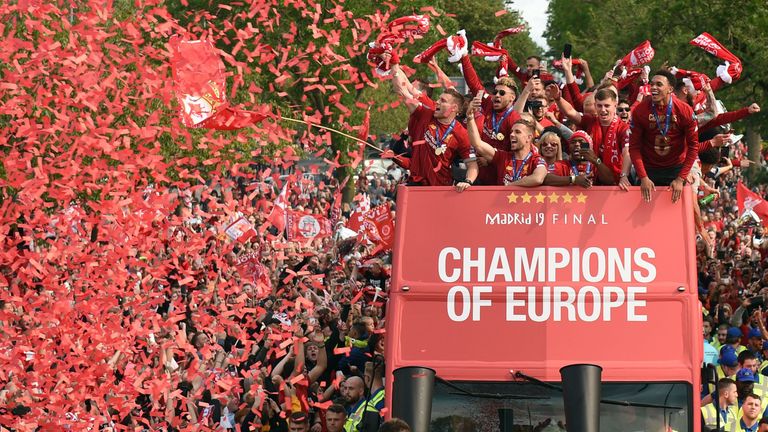 Liverpool enjoyed a heroes' welcome after returning to Merseyside from their triumphant 2-0 Champions League final victory over Tottenham in Madrid.

Close to 750,000 fans flooded the streets of the city and suburbs on Sunday to celebrate the win as Jurgen Klopp's men took to a red open-top double-decker bus emblazoned with the words 'Champions of Europe'.

Starting at Allerton Maze, the parade travelled towards The Strand to a chorus of 'You'll Never Walk Alone' before ending in a celebration on the Mersey waterfront.

A sea of red adorned every inch of the eight-mile stretch, with flares and tickertape launched throughout as supporters waited for a glimpse of their heroes from any vantage point possible - from tables and chairs, to traffic lights and railings.

Others decided to walk alongside the bus while serenading their heroes throughout - captain Jordan Henderson orchestrating the singing from the front of the bus with one hand carefully on the coveted trophy.

Among the obligatory flags and banners, there were also cardboard cut-outs of Klopp and Mo Salah as well as a number of inflatable European Cups.

"It's amazing, absolutely amazing," Henderson remarked as he spoke to Liverpool's website.

"We were looking forward to it straight after the party last night, to get back. It's amazing to come back with the trophy to show the fans."

As the bus approached their final destination, almost four hours later, the fireworks started in a spectacle that had many on the bus, including Klopp himself, almost lost for words.

"It's emotional," Klopp told Liverpool's website. "I cried a little bit as well because it was so overwhelming what the people are doing.

"When you have direct eye contact and you see how much it means to them, that's touching, to be honest. It's brilliant."

Many supporters have been thanking the players for their achievements - a gesture that was not lost on the scorer of Liverpool's second goal, Divock Origi.

"We know what Liverpool means in the world as a club, as a football club, so I think we can be happy that people make that statement," Origi said.

"It means a lot to the people. I can see it in their eyes, in their reaction.

"It means so much and it's beautiful for us because we give so much on the pitch and then whenever you come back and you get a welcome like this, it's always good."

Relive all of today's incredible scenes from Liverpool's victory parade in our recap here.