Thierry Henry says Steven Gerrard will go down as one of the best Premier League players, despite never winning the competition.

Gerrard will leave Anfield this summer to join MLS side LA Galaxy, 17 years after making his Liverpool first-team debut as an 18-year-old in 1998.

He will play his last competitive home match against Crystal Palace this Saturday - live on Saturday Night Football - before signing off with a trip to Stoke on May 24.

"To see him leave the league is going to be a sad day," Henry told Sky Sports. "I'm not a Liverpool fan but I'm a football fan; to see him not wearing that red shirt and stepping out of the tunnel at Anfield is going to be weird.

"I played so many times against so many good players, especially in the Premier League. Frank Lampard was and still is special, Paul Scholes was, every time, the guy we feared at Arsenal when we were playing Manchester United, but for me, Stevie G is up there.

"For me, he's the player where you say: 'OK, he didn't win the league, but he gives you so much pleasure and you respect them so much’. The amount of pleasure - and trouble when I was playing him! - that he gave us, I respect him a lot. He's one of the best players that ever played in this league."

Gerrard scored his 185th Liverpool goal at Chelsea last weekend and has made more than 700 appearances for the club. 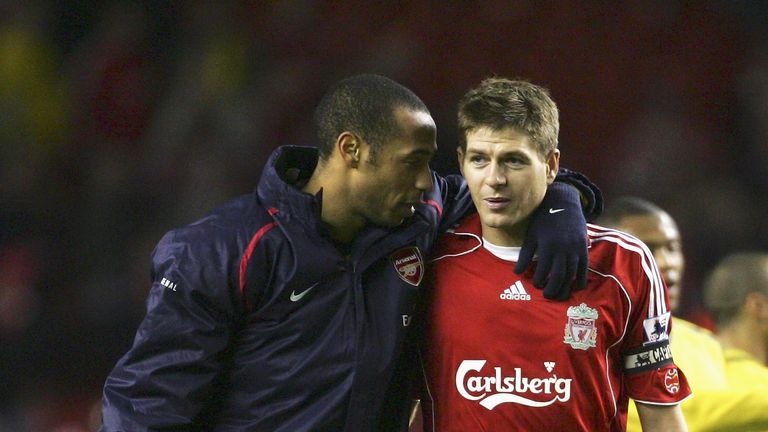 To see him (Gerrard) leave the league is going to be a sad day... He's one of the best players that ever played in this league.

"Him playing for just one club in this country is special," added Henry. "I know he didn't win the league - I know he would have wanted to win it, especially with Liverpool - but for me it doesn't really matter.

"I have maximum respect for him staying at one club but also the way he behaved on and off the field; his goals, the way he drove his team and made everyone believe they could win even if they were losing.

"There were many special moments that he gave Liverpool fans and it's been a privilege to play against him.

"Yes, he didn't win the league but sometimes a player has won the league and not given as much as he did."

Watch Sky Sports News HQ for more tributes to Steven Gerrard and see an extended interview with the man himself On Demand, via Sky Go or via the Sky Sports iPad app.