Aaron Ramsey has no regrets over joining Arsenal, who he says made the biggest effort to sign him

Aaron Ramsey on joining Arsenal aged 17: “There are no regrets from my side. He [Arsene Wenger] has a track record of bringing through young players and turning them into great players." 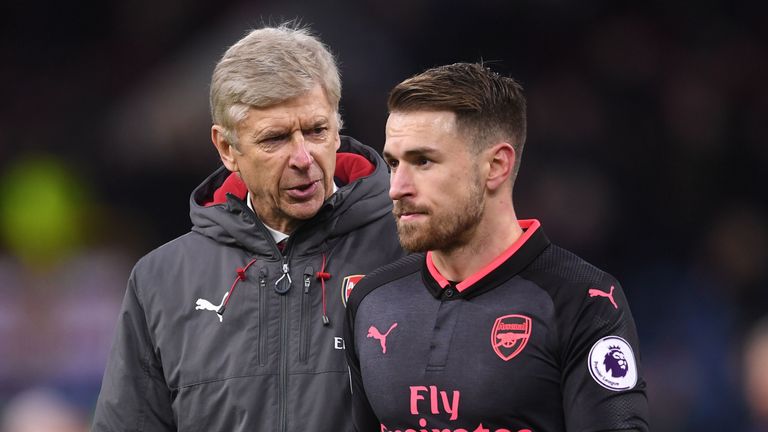 Aaron Ramsey says he chose to join Arsenal from Cardiff as a 17-year-old as he felt they and Arsene Wenger made the biggest effort to sign him.

Wales international Ramsey joined Arsenal for £5m in June 2008, barely a year after making his debut for the Bluebirds.

He then spent 11 years with the north London club before moving to Juventus in 2019 following the expiry of his contract.

Ramsey insists he made the correct decision in joining Arsenal as a teenager and praised Wenger's insistence on introducing talented youngsters into the first-team squad.

"I had some tough decisions to make but I felt that Arsene and Arsenal made a big effort to get me to join them," he told Sky in Italy in an exclusive interview.

"They took me and my family to Switzerland where he was covering the Euros at the time. I met him there and his plan and his vision of developing me into the player he saw was quite exciting to take up.

"There are no regrets from my side. He has a track record of bringing through young players and turning them into great players.

"That was what was important for me, that I went straight into the first-team environment and was given an opportunity early on to show what I could do, even at that age.

"I had opportunities when I went there. I played and trained every day with the first team, so for me it was the right decision."

Ramsey's time with Arsenal eventually drew to a close on July 1, 2019, when he officially became a Juventus player having signed a pre-contract agreement with the Turin club in February of that year.

"The situation happened at Arsenal then Juventus came in and wanted to sign me," added Ramsey.

"Again, I felt really wanted by them and they made a lot of effort to try and sign me.

"I am really excited to have this opportunity to play for this great club. Hopefully I can contribute to help win many titles here.

"In the Premier League there's a lot more space and the game is a bit more open. The intensity is a bit higher in the chasing back and forth.

"I've been very impressed by the standard and the league and the technical quality. I'm looking forward to hopefully having a successful season."

As well as targeting success with Juve, Ramsey is also keen to do his part in ensuring Wales enjoy a strong run in Euro 2020.

Wales caused a stir by reaching the semi-finals of the last European Championships in France four years ago, where they lost to eventual winners Portugal 2-0, and Ramsey is hoping they can upset the odds once again after securing their place in this year's tournament.

"[My hope] for Wales is to go into another Euros to try and get as far as we can," said Ramsey.

"Last time, nobody would have said we'd get to the semi-finals, so to go there on the big stage again, to prove myself and hopefully help the team have a very successful journey again [is my aim.]"