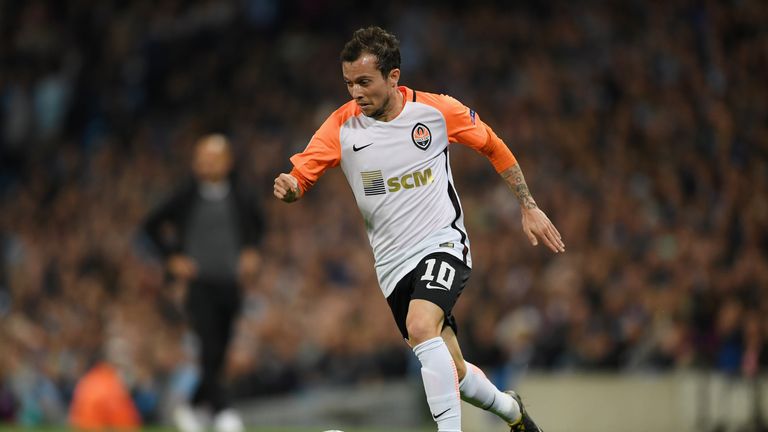 Everton have completed the signing of Brazilian international midfielder Bernard on a free transfer.

The 25-year-old, who was available after his contract ran out with Shakhtar Donetsk in June, has received his work permit and put pen to paper on a four-year deal with the club.

Sky Sports News understands Everton manager Marco Silva played a key role in persuading Bernard to join him at Goodison Park, with many of Europe's top clubs enquiring about his availability.

The 25-year old attacking midfielder landed in England on Wednesday for a medical before completing the move just before Thursday's 5pm deadline.

After signing his contract, Bernard told evertontv: "I chose Everton because of all the things I had heard about Marco Silva and after speaking to him I was happy with what he said to me.

"The manager made me feel confident about playing here. He is a very good coach and he has achieved really good things at other clubs.

"Everton is a club with a great structure and a lot of tradition, historically the fourth most successful club in England. When I found out about this opportunity and what the manager wanted out of me I was happy.

Bernard is rated as the second most valuable Deadline Day buy at £8.8m by Sky Sports Fantasy Football.

"That is why I made my choice, because of the confidence both the manager and the Club showed in me.

"I did not need any convincing to come here. I believe I will be able to show my best as a player here."

Manager Silva said: "Bernard is a quick player, very good technically and he can play on the left or right wings and as an offensive midfield player behind the striker.

"He has experience of playing in the Champions League for Shakhtar Donetsk for the past five years and the fact he has 14 caps for Brazil is a further reflection of his quality."

Bernard - who has 14 Brazil caps - began his career in his homeland with Atletico Mineiro, before Shakhtar signed him on a five-year deal in the summer of 2013 for £40m.

He played for them as a left-sided or central attacker and the Ukrainian side won three League titles with Bernard in the ranks, making it a league and cup double in the last two seasons.

Last week, AC Milan thought they were set to sign him, only for West Ham to enter the running, before Everton then entered the negotiations on Sunday night.

Bernard made his senior international debut in 2012 and was in the Brazil squads which won the 2013 Confederations Cup and reached the 2014 World Cup semi-finals on home soil.

He missed this summer's World Cup in Russia, having suffered a shoulder injury at the end of last season.