Frank Lampard brought through Mason Mount and Reece James at Chelsea but ahead of the Londoners' visit to Goodison Park he praises the "huge" talent of Everton's rising star Anthony Gordon. Watch Everton vs Chelsea live on Sky Sports Premier League from 1pm on Sunday; kick-off 2pm. 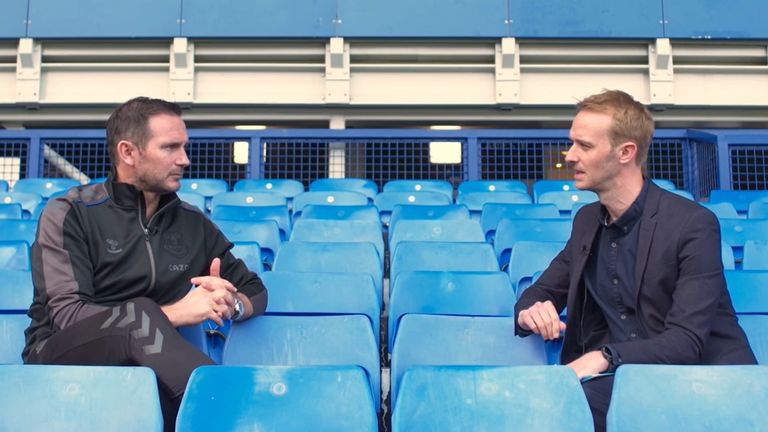 "When you feel things aren't going your way, you need to fight your way out of it. That's football. I've been in it many times as a player and now as a coach, and the only way I know is to work your way out of it and work hard."

We're sat in the stands at Goodison Park and Everton boss Frank Lampard is in a determined mood.

Still feeling the frustration from decisions which went against his side across Stanley Park at Anfield last weekend, Lampard is clear in his belief in the quality of this Everton team and confident they will turn their situation around before the end of the season.

But at the same time, he knows that only hard work will get them to where they want to be come the final day.

That mentality was a trademark of his playing career and he wants it to be a hallmark of the teams he manages.

After this lunchtime's training session at the stadium - held in front of club sponsors and partners - Lampard was soon back out on the pitch on his own, running lengths of the Goodison pitch. "I wouldn't call it shuttle runs," he laughs. "I was more like a snail!" But it's the mindset that matters.

"We have to have real strong belief," he says. "When times are difficult in terms of results and position, it's important you remain positive and have a belief about what you can do here and that maybe things will go in our favour. We need to keep working towards that."

Things don't get any easier for Everton. After that tough test at quadruple-chasing Liverpool, they host Chelsea this Sunday.

Of course, for Lampard the game holds extra significance, given all he achieved as a player for Chelsea and his season-and-a-half in charge. This will be his first clash against them since he was sacked in January 2021, after delivering a top-four finish and FA Cup final in his first campaign.

Will that familiarity be an advantage? "I don't know," he smiles. "It means you understand their quality and how they play because I've worked with most of the players at close hand and seen the things they can do. Maybe it helps a little bit - but I'll only be able to say that after the game if it works in practice."

Undoubtedly, though, Lampard has played an important role in the development of two of Chelsea's most important players: Reece James and Mason Mount. He handed both of them their senior Chelsea debuts and they've gone on to become key figures at the club.

Mount is Chelsea's top scorer and top assist-maker this season, while Thomas Tuchel, speaking after the 1-1 draw at Man Utd on Thursday, was pondering what might have been this season had standout right wing-back James not struggled with injuries this term.

Lampard's pride in what the pair are achieving is obvious.

"They're great lads, really, really talented boys," he says. "Great attitudes, both of them in their own ways, and I'm very pleased for them because I know how they are as lads.

"I've got a close relationship with both of those lads in particular and others I've worked with there - Tammy [Abraham] has gone his own way, Billy Gilmour and Fikayo [Tomori] and these players were a real pleasure to work with at the club.

"It's great to see, I wish them very well in their careers and I've got absolute confidence they'll do great because of the way they are. As much as they've got great talent, they've got great desire to be top players and they're there already now."

Lampard has another young starlet in his ranks at Everton. The future of 21-year-old Anthony Gordon was unclear during the days of Carlo Ancelotti and an underwhelming loan spell at Preston in the Championship. But he's started 11 of Lampard's 12 Premier League games in charge and showed the bite and drive Evertonians were desperate to see at Anfield.

"I've been really impressed," Lampard says, when asked about how local lad Gordon has risen to the challenge. "He's becoming more of a man, more of a leader with every game, with every day. His dedication and talent is huge.

"His feeling for the club, to bring that across at such a young age is something pretty special. I love working with him, love him as a player. There are things he wants to improve and he can improve and that's absolutely normal in terms of development. But what he's doing for us at the minute, he's an absolutely huge player."

Gordon's trajectory and where it could take him is an interesting one. In his pre-match press conference on Friday, Lampard likened Gordon's mentality to Mount's. The Chelsea midfielder is a couple of years older and now an England regular.

His feeling for the club: to bring that across at such a young age is something pretty special. What he's doing for us at the minute, he's an absolutely huge player for us.

So what does Gordon need to do to move to that level in the future?

"Maybe a bit of end product," says Lampard, referring to Gordon's return of four goals and two assists this season.

"I'd say that to his face and he'd say it to me because he's so hungry to do well for the club. But in terms of what he's doing, I can't ask for too much more because he's giving everything. He's creating opportunities for us.

"Everyone who was watching the game [against Liverpool], he's up against one of the best right-backs in world football and everyone saw the performance he put in. Yes, that little bit of end product but that's absolutely normal, that will come naturally with the development and the way he works."

Gordon has been with the club since the age of 11 and Lampard is keen to harness that connection between the talented attacking midfielder and the fanbase who will fill up the stands we're sat in for the important game with Chelsea.

But does this perilous situation put more pressure on Gordon, given his connections with Everton? "Yeah but in a good way because he's a smart boy," says Lampard.

"It seems to me he knows how to take it and it's good to have players in your squad that feel it like that. That's what you want. That's why fans are drawn to their own because they feel they're local lads that care so much and have the same feeling as the person that will be sitting here on Sunday.

"Him transmitting that on the pitch for us is a great thing."

It feels like what happens inside this stadium will go a long way to determining Everton's fate. After Chelsea, they have Brentford and Crystal Palace here. As Lampard says, they must harness that home advantage - and ignite this fanbase with the determination they show on the pitch.

"They are an incredible fanbase," he says. "The support at this stadium, we feel that. We have to engage them, we have to play with an intensity and focus and the basics that they absolutely expect and rightly so. If we do that and they get behind us they make it a very difficult place for people to come. We have to use that, it's as simple as that." 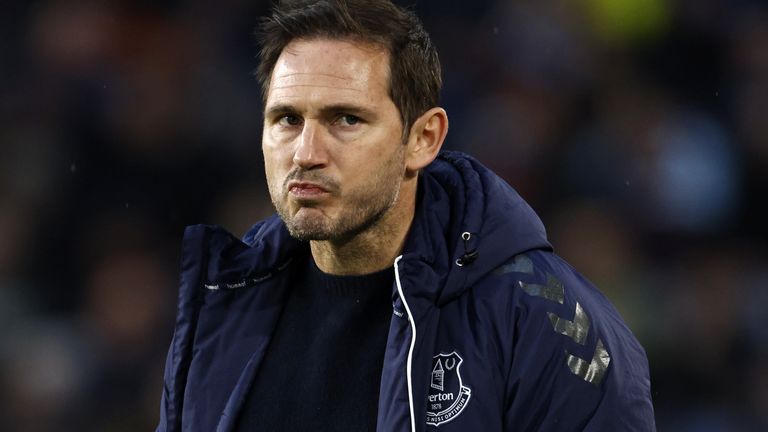 Lampard on the psychology of dropping into the relegation zone

Everton's defeat at Liverpool, coupled with Burnley's win earlier on last Sunday meant the Toffees dropped into the Premier League's relegation zone for the first time since December 2019. Ironically, on that occasion they beat Chelsea at home - and kicked off the bad run of form for the visitors which led to Lampard being sacked by the London club.

But has being in the bottom three affected the mindset in the Everton camp?

"I'm not sure," says Lampard. "For me it hasn't because we understand our situation. It's been very close since I've been at the club. It's not easy to turn that when you're getting towards the end of the season. The reality is here anyway, whether we're one point, two points out of the relegation zone or one or two points in it. This situation is clear, we need to win games, we need to get points to stay in the league. For me it just adds to the focus of what you need to do."

Lampard on the tactical battle

How do Everton find a way to earn those three points against Chelsea on Sunday?

They recorded just 17 per cent possession at Liverpool and it has been highlighted Allan only made one successful pass.

While Lampard will clearly want an improvement on those figures, he says his team will once again need to bide their time without the ball - and then strike when they do.

"Chelsea again will have possession," he says. "We're at home so we have to be patient to that point because they want to draw you out with that possession and we have to be very smart with how we approach the game and understand we need to be clinical in our moments when we can attack or have possession.

"I thought we did that pretty well at Liverpool, other than the last bit, the last shot. Things didn't go in our favour, I think we should have had a penalty, which was well documented, but we need to be clinical in both boxes when we get our opportunities."