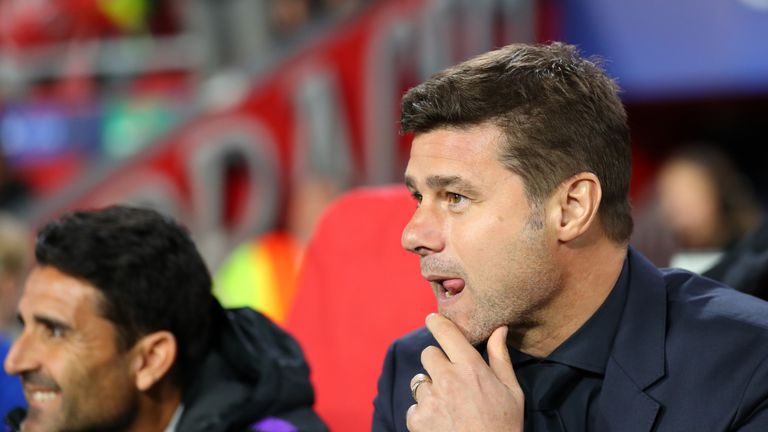 Tottenham boss Mauricio Pochettino jokes the NFL game at Wembley could help Spurs when they face Manchester City the next day.

Tottenham manager Mauricio Pochettino is confident the Wembley pitch will be in good condition for their Monday Night Football clash with Manchester City, live on Sky Sports.

Spurs take on the champions at the national stadium just 24 hours after the NFL match between the Philadelphia Eagles and the Jacksonville Jaguars.

Playing the game on Monday night was Tottenham's only option as their new stadium is not ready and City were not open to reversing the fixture and then having to visit Spurs later on in the season.

NFL games have left the Wembley turf in bad condition in the past, but the Spurs boss is confident the ground staff can do a good job, though he joked it might benefit his team if they do not.

"Maybe it is good for us because we are going to face one of the best teams in Europe and the world in Manchester City and maybe it will help us," he said.

"It wasn't a plan for us to play in that period at Wembley and now we cannot complain.

"Only we need to accept the reality and know that we cannot change that.

"We hope that the weather will be good and not kill the pitch and we can play in a very good condition.

"I am sure all the people that are involved in the pitch are going to work so hard to get it in a really good condition. That is my wish and I hope it can happen."

The rearranged fixture comes just 48 hours before Spurs have to go to West Ham in the Carabao Cup and is one of five games in 12 days.

Pochettino accepts the packed schedule is in part due to their stadium delay and is not making excuses.

"That is not the ideal situation to compete, we have a problem, we create the problem and we need to sort the problem," he added. "We can't complain, we are a little bit unlucky that the stadium is not finished.

"It was not the plan to be at Wembley, different things can happen like the NFL and you cannot change the date and we need to accept that as reality and not complain.

"We will be clear in the way we want to approach the game and we will try to win the game that is the most important thing.

"No one is going to explain if we don't win the game that we play in difficult circumstances, when you lose, you lose and you need to accept the criticism.

"When you win it is easy to explain but when you lose you cannot use an excuse. We created that situation and we need to sort that."