Harry Kane admits Tottenham missed a big opportunity to demonstrate their title credentials by losing to Burnley but vowed they will pick themselves up quickly.

Spurs could have moved to within two points of Manchester City and Liverpool, who are now back on top of the table, with victory over Burnley at Turf Moor but slipped to a 2-1 defeat.

The good news was the return of Kane after seven games out with an ankle injury, who was Tottenham's chief threat and scored Spurs' equaliser in the 65th minute. He said: "Obviously it was a big chance for us to get the three points and get that little bit closer. It's a shame because, when we needed to find another gear, we didn't have it in the locker.

"We've got to be real with ourselves, we've got a tough week coming up so we've got to dust it off and be ready for that. It was a big opportunity and it's a shame we couldn't take it."

It was deja vu for Spurs, who have shown a frustrating tendency over the past few seasons to fail to put their foot on the accelerator when a real title tilt appears to be within their grasp.

Their next three games see them face Chelsea and Arsenal in the Premier League before taking on Borussia Dortmund in the Champions League.

Kane added: "It would be nice if we could have put the pressure on and won the first game and built from that.

"We don't always want to be having to react from a poor result. But we'll dust it off. We've still got a lot to play for.

"People will probably say now it's a two-horse race but that's not our problem. All we can do is take care of ourselves. Today was disappointing but we'll look to bounce back as quickly as possible. 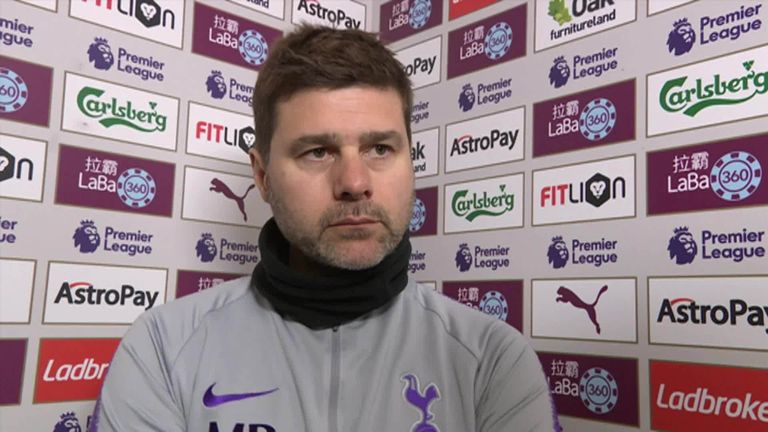 "We're a team who don't like to make excuses but we've been playing away from home for the last two years, we've had a tough time, but it is what it is.

"We're in the hunt for the Premier League, we're still in the Champions League so we're in a good place. We've been there for a few years, we've got to see whether we can take it up another level."

Kane is no stranger to ankle injuries but once again returned ahead of schedule having initially been expected to be sidelined until the middle of March.

"It's a lifestyle," said the 25-year-old. "It's not that you get injured and then what can I do to get better, it's what you do throughout the whole year that, when you do get injured, your body already knows what to do.

"I'm hungry, I always want to get back as quick as possible. But I've got to make sure it's right as well.

"We got the balance right and it felt good out there today. Hopefully I can catch a bit of luck and it won't happen again."