Harry Kane exclusive: Tottenham have no excuses for disappointing start to season 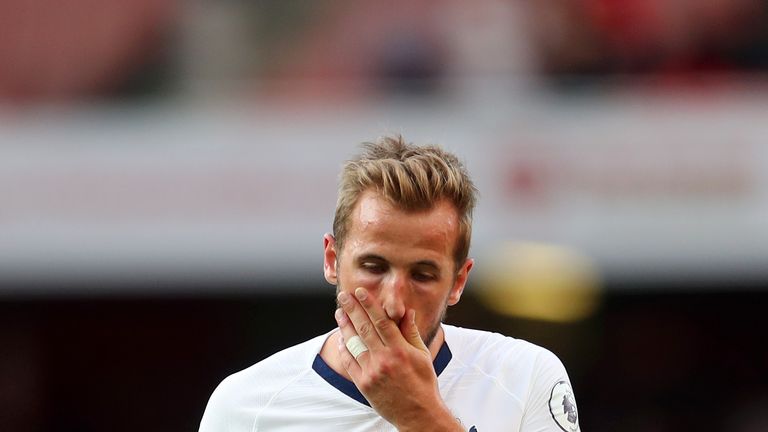 Harry Kane admits Tottenham have no excuses to call on any more following a "disappointing" start to their campaign.

Spurs have won just two of their eight games this season, and were knocked out of the Carabao Cup on Tuesday night by League Two Colchester as their search for a first trophy since 2008 goes on.

Mauricio Pochettino's side are 10 points behind leaders Liverpool in the Premier League, and also threw a 2-0 lead away at Olympiakos in their opening Champions League group-stage game last week. In an exclusive interview with Sky Sports' Soccer Saturday, Kane says there is no hiding behind Tottenham's poor start, and says they cannot use the excuse of inexperience any longer.

"I'd say it's been disappointing, I don't think there's any hiding behind that," he said. "To only win two games out of our first seven is not the standards that we've set in previous years.

"We've put ourselves in good positions this season, we just haven't managed to see the game out or find a way to win like we have in previous years.

"It's a disappointing start, but there are plenty of games to turn that around, starting with the game on Saturday [against Southampton]. "[Game management] is something we need to get better at, when we go ahead in games we need to be more confident, to see the game out, whether we drop behind the ball or carry on playing, whatever suits that game.

"We're not inexperienced any more, we're not young any more, the excuses aren't there for us any more. It's down to us players to take responsibility."

While Kane acknowledges Spurs' start to the season has fallen below expectations, he is not ruling out a title challenge, saying: "If this was January or February people would be saying there's no chance of us winning it.

"Obviously it's not the ideal start, but stranger things have happened. You can never rule yourselves out until it's done."

Watch the full Harry Kane interview on Soccer Saturday this Saturday from midday and follow Tottenham vs Southampton with our live blog on skysports.com and the Sky Sports app.