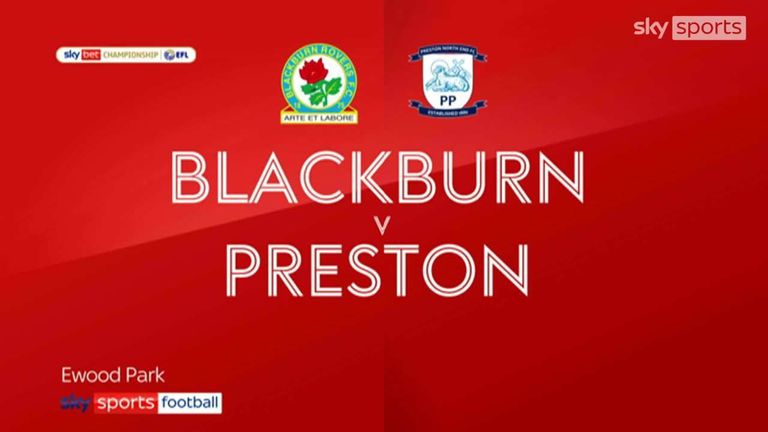 Ben Brereton Diaz scored his 17th of the season as Blackburn closed the gap on the top two with a 1-0 win over local rivals Preston.

Played in poor conditions with surface water making free-flowing football impossible, Rovers dug deep to edge the derby and their Chilean striker made the difference with a towering header - only a half-chance in itself - to secure maximum points.

It is perhaps a sign of the form they are in that Tony Mowbray's men can produce a battling performance and win when they cannot play their natural game, and after notching a third successive win for the first time in just over a year, their fans will be dreaming of a promotion push.

They are seven points off second-placed Bournemouth and visit the Cherries next week.

It was a familiar tale on the road for the Lilywhites who, despite a recent upturn, have won just two in 11. They ought to have taken something after controlling the first half in which Ched Evans tested Aynsley Pears.

Their inability to turn control into points was the difference between the sides.

Pears replaced the injured Thomas Kaminski in goal for Blackburn, while Preston made four changes, including a debut for Matthew Olosunde.

The surface water played a role in the early chances, as the ball held up to delay Alan Browne who dragged wide, before the pitch did similar to a routine ball across the pitch that Brereton Diaz intercepted before putting in a teasing cross that just evaded Reda Khadra.

Superb improvisation from John Buckley fashioned an opportunity midway through the first half but the weak shot was simple for Daniel Iversen.

The best chance of an opening period low on quality came in the 34th minute when Ben Whiteman's well-worked corner found Evans at the near post, whose goal-bound strike was saved by Pears who gathered at the second attempt.

The half ended with Mowbray receiving a booking after a furious reaction to a refereeing decision from Gavin Ward, which summed up the frustration of the first 45 minutes.

His mood improved in the 53rd minute as Rovers took the lead in clinical fashion when Khadra's whipped cross was met by a stunning glancing header from Brereton Diaz that found the far corner via a post.

The game became increasingly niggly thereafter, though Preston had a late penalty shout after the ball seemed to strike Ryan Nyambe's arm, with the team and supporters reacting furiously after nothing was given.

At the other end, Iversen produced a fine low save to deny Brereton Diaz in the final two minutes, but Rovers had done enough.

Blackburn's Tony Mowbray: "We had to manage the conditions. This week we had to manage a pitch where the ball going to stick sometimes, so be careful what you do and how you pass it. The difficulty is preparing the football match and half an hour before kick-off you have to scrap everything and tell them to put it behind their full-backs and Brereton and (Reda) Khadra have to run after it, as basic as that really.

"Don't take chances at the back, win your headers, defend properly, do your job, be strong, and I though they did that today, particularly the back three were resilient, strong, powerful. It was probably more suited to them and yet we've managed to find the way to get the win in what was a physical confrontation really. It's good to win ugly. There was no real pattern to it, other than to help it forward and let the conditions dictate the game. You know they've got character, commitment and togetherness."

Preston's Frankie McAvoy: "I thought that was a bit of quality in the game, (it) went against us. I didn't think there was much in the game at all between the two teams. I think we probably had more of the ball and more of the chances. They might have had one or two more on target than we had.

"We get an opportunity with Alan Browne bursting through in the first half, which was a great ball from Ched (Evans) to penetrate in behind, and I think the water holds the ball up. The one bit of quality that happens in the second half, it's too cheap to allow the cross into the box and we actually spoke about making sure you don't allow (Ben Brereton) Diaz or anybody to get across in front of you for a header."