Rafael Benitez is rightly gaining plaudits for masterminding Newcastle's rise into the top half of the Premier League table, but which players have been key to helping them get there?

Newcastle have only lost one of their last eight games, securing wins over Manchester United, Southampton, Huddersfield and Leicester and climbing to 10th in the table ahead of their Super Sunday meeting with Arsenal.

From Kenedy to Paul Dummett, we examine six of the top-performing players behind their recent improvement…

Chelsea youngster Kenedy has proved an inspired loan signing, with Sky sources saying Bayern Munich and Paris Saint-Germain have asked Chelsea to be kept aware of developments around his future. It's a measure of just how impressively he has performed on Newcastle's left flank.

Kenedy wanted by Bayern and PSG

Kenedy's goals and assists have been the highlights - he has provided two of each in eight appearances so far - but Benitez has been most impressed by his composure. "He's not scared on the ball," he said recently. "Sometimes, you are in a rush or under pressure or the excitement doesn't allow you to think clearly, but with him, you know you have that."

Kenedy has shown tenacity to match his talent and temperament. The 22-year-old has embraced the less glamorous aspects of the game and given Newcastle a much-needed injection of energy. In the recent victory over Huddersfield, in which he set up Ayoze Perez's winner, he covered the most ground (11.2km) and made the most sprints (79) of any Newcastle player.

Perez has split opinion for much of his time at Newcastle, with many fans feeling he has not quite fulfilled the early promise shown after his arrival from Tenerife in 2014, but there is no disputing his present importance to the side. The Spaniard has started seven of Newcastle's last eight Premier League games at No 10 and his impact has been impressive.

His display against Leicester last weekend was his most effective yet. After laying on Jonjo Shelvey's opener, Perez's brilliant lob over Kasper Schmeichel proved the difference between a draw and a win. The 24-year-old also scored Newcastle's winner against Huddersfield a week earlier and provided assists in recent meetings with Bournemouth and Crystal Palace.

"Some people are saying he is too lightweight and he gives the ball away, but he plays in a position where he often has a lot of players around him and he has to do difficult things," said Benitez last week.

"He has the movement and the understanding of the game and when we need something, for a player who plays between the lines of defence and midfield, he understands these things. We do not have more players like that."

There was little fanfare when Slovakian goalkeeper Martin Dubravka sealed his move from Sparta Prague to Newcastle on the final day of the winter window. The 29-year-old goalkeeper was a relative unknown who had never featured in one of Europe's top leagues, but his impact at St James' Park has already led to calls for Newcastle to make the loan permanent.

"His start against Man United was Roy of the Rovers stuff," said their ex-goalkeeper Shay Given on Sky Sports News last week. "Coming to the Premier League, a new country, a new language and he looked as though he had been there for 10 years. It was a fantastic debut and it gave the club a lift."

Since that man-of-the-match display against Manchester United, Dubravka has helped Newcastle keep further clean sheets against Southampton and Huddersfield. He has commanded his penalty box well and earned plaudits for his awareness and passing ability too. "I think they would be mad not to tie him down to a long-term contract," added Given.

Jamal Lascelles' importance to Newcastle is no secret but the statistics reinforce the point. In the seven games their club captain has missed this season, they have conceded 20 goals and not recorded a single win.

The 24-year-old is vital to Newcastle and, aided by Florian Lejeune's return to the side, he has been particularly impressive in recent weeks. Lascelles' leadership and aerial prowess were key to the clean sheets against Manchester United, Southampton and Huddersfield. He has shown he belongs at the top level and shown why Benitez values him so highly.

Newcastle with and without Jamaal Lascelles starting 2017/18

He has impressed with his attitude, too. Lascelles could feel justifiably aggrieved not to have received an England call-up, but instead it has fuelled his determination. "I'm not going to let my head drop about it if it doesn't happen, because that's football," he told The Shields Gazette recently. "It would be a nice achievement for me, but, first and foremost, I'm concentrating on doing well for Newcastle."

After needless red cards against Tottenham and Everton in the first half of the season, Shelvey has refocused and rediscovered his form in the second. The 26-year-old remains an unpredictable figure, but his recent performances have led to suggestions that, like Lascelles, he should be considered for an England call-up ahead of the World Cup. 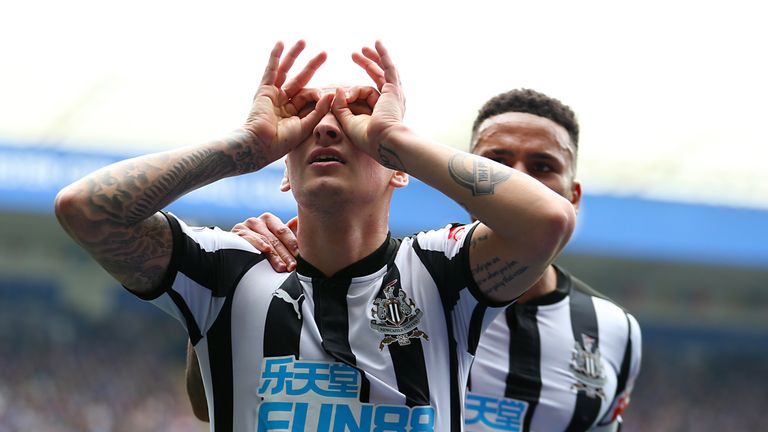 Shelvey's passing - both long and short - has been outstanding, and after providing two assists in the 3-0 win over Southampton, he notched his first league goal of the season against Leicester. "The main thing is he has the talent and he has the quality," said Benitez. "So he just has to settle down a little bit and then he can use his quality in the game to dictate the tempo."

Shelvey, for his part, believes he has ironed the inconsistency and ill-discipline out of his game, and he has also benefitted from Mo Diame's move to midfield. The former West Ham man struggled in a more advanced role last season, but he has excelled since dropping deeper. His combative displays have kept Mikel Merino out of the team and provided a platform for Shelvey to shine.

Paul Dummett is perhaps the most unlikely star of Newcastle's recent turnaround. The defender is a local lad and academy graduate, but he was told by Alan Pardew that he would never make it in the Newcastle first team and few supporters were overly concerned when he succumbed to an injury on the opening day of the season.

It is only now that he has returned that his value to the side has become clear. In the 13 games he has started since his comeback in December, Manchester City and Liverpool are the only teams to have beaten Newcastle. His steady performances have helped shore things up at the back. He was handed a new contract in February and the fans who doubted him now sing his name.

"People don't realise how important Paul Dummett is," said Benitez recently. "He is someone who knows his job. He is not bad in the air, he is not bad with his left foot. People say: 'He needs to go to the byline and make crosses'. It doesn't matter: he can make passes, he can defend, he can help at set pieces. He is a player who will give you something different. Something we don't have already."