Matt Ritchie exclusive: I thought Newcastle career was over before Bournemouth reunion fell through

When Newcastle retook the lead late on having already blown a 2-0 advantage against West Ham last month, a result that would inch them closer to Premier League safety amid a typically tumultuous season on Tyneside, it wasn't one of the campaign's regular figures whose first thought was his team-mates' focus.

Wing-back Matt Ritchie, making only his third league start since the first week of January, barked out the order across the pitch at St James' Park, the player personality insight we have only been able to glimpse as one minor novelty from the absence of fans for over a year.

Had it happened while the terraces roared, the fan calls for Ritchie to be named Newcastle captain which followed on social media would never have emerged. Ritchie did not try to inspire his team in order to prompt that public response, of course. It's just what he does.

"It's a natural thing for me. I've always been the same, on day one with the first team at Portsmouth as a 16-year-old, I was out doing that on the training pitch, it's just what I am," he tells Sky Sports. "Some of the players were probably thinking, 'who's this kid?'

"At Newcastle, we have a core of players who have been at the club for some time, know what the club's about and what the expectations are. We all have a duty to lead and try and perform, try to help one another on the pitch and off it. I do feel like a leader but we all have to take that responsibility for one another too."

The Newcastle team certainly looks better with him in it, but Ritchie could quite easily be playing Championship football right now. In the blink of an eye, he has gone from first-team fringes to first on the teamsheet since a bright return to Steve Bruce's line-up in early April.

Since then, the Toon have picked up eight points from five games, almost a quarter of their tally across the entire season.

Football's funny like that. It was barely three months ago the 31-year-old had agreed a loan move to old club Bournemouth on Transfer Deadline Day, only for Newcastle to pull the plug owing to an injury to left-back Jamal Lewis.

Even though it was a temporary transfer, Ritchie had got himself ready to wave goodbye to St James' Park for good.

"If I'm honest, yes, I thought my Newcastle career was over," he reveals. "As a kid I went on loan as a young age, when I went back to Portsmouth I could've stayed there longer but took the decision to move on and go and continue to play. I've always backed myself to get back up the leagues. 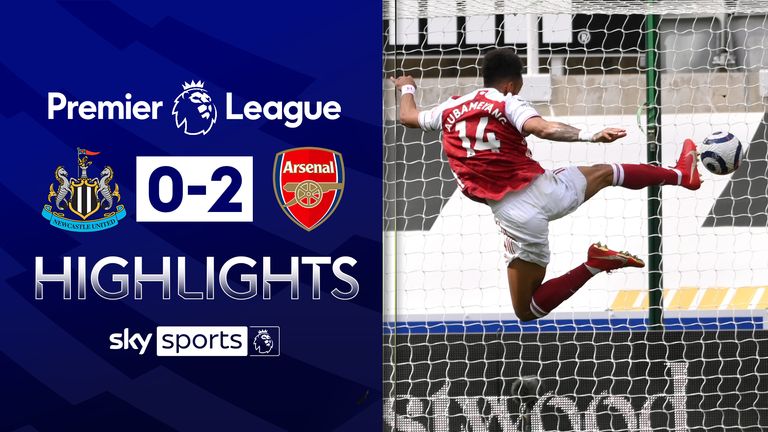 FREE TO WATCH: Highlights from Arsenal’s win over Newcastle in the Premier League

"It was difficult, it was probably my first spell in my career where I've been fully fit and not involved, so that was difficult mentally and physically, how to adapt and adapt my training. They're challenges I've not had before.

"It's about managing your body so you are ready when called upon, training throughout the week at the intensity which is going to be needed for the weekend, and when you're not involved for a long period that can be difficult.

"I feel like I've come through it, learned a lot in the last six months and I'm pleased with how I've reacted personally to those challenges."

Three points against Leicester on Friday Night Football will secure Premier League safety for a Newcastle side who looked like they might be caught only a few weeks ago. That run in April has come at a good time, but has only strengthened the feeling from the club's fans that the squad has far more ability than to limp over the line every 12 months.

Had they replicated the points-per-game tally of the 11 Ritchie has started, Bruce's side would be in with a shout of a top-half finish. If only life were that simple. But that lack of consistency is a frustration that really rankles with the player, who is one of a number that will remember reaching 10th in their first season back in the Premier League.

"We have so much quality within the group, that's the frustrating thing sometimes, that where we are in the league doesn't tell the full story," he says. "That's the challenge of the Premier League, you don't always get what you think you should get.

"We have a lot of quality, a lot of determination in the side, but it's about having that consistently throughout the season. It's a mentality, a culture, a philosophy throughout the football club. That can always be improved.

"Collectively as a group we've been really good of late. The Brighton performance at the end of March, losing 3-0, hit home to a lot of us that we were running out of games, running out of time to pick up points and that may well have been a blessing in disguise."

Ritchie's own run of form has probably come too late for any outside shot of a return to the Scotland fold more than two years after he requested to be overlooked for the "foreseeable future" during the Alex McLeish era.

In any case, should the phone ring from Steve Clarke ahead of this year's European Championships, Scotland's first major tournament in more than two decades, the winger told Sky Sports he would not feel comfortable joining his international team-mates for their finest hour, having played no part in their qualification.

"Even if the manager was to ask, it'd be unfair on the lads that have sacrificed and put in so much for the success they've had," he admits. "I'm delighted for everyone involved, I did speak to the manager when he first took over, but my circumstances with my family living down south, I took the decision at 29 that it was maybe better for me to give that time to spend with my children.

"He understood that, and I stand by that decision. I like watching the games, the players I've played with, the wee man John McGinn is flying, and hopefully they can have some real success at the Euros.

"When I speak to John, he says how much every single player enjoys it. They love going, the culture they have within the group, and from the performances they give, you can see it. They're playing under enormous pressure, but you can see how much they enjoy it, they have a real way of playing, and they've had some real success so far."