Graeme Jones: "I spoke to the owners on Wednesday morning and they have asked me to take the team on an interim basis for the next two games, so Crystal Palace and Chelsea at home" 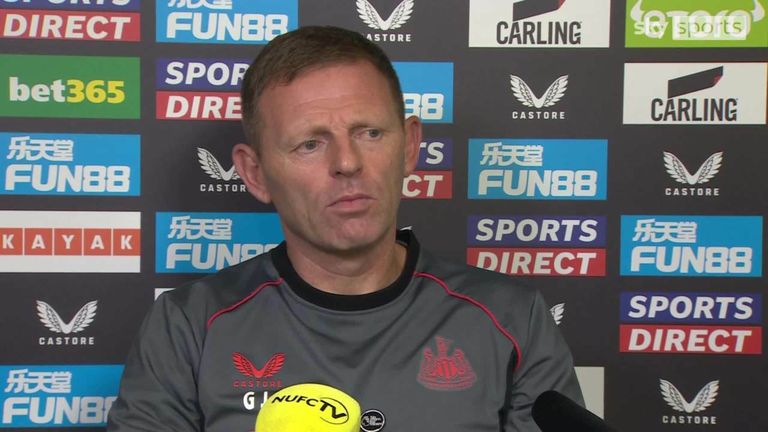 Newcastle caretaker manager Graeme Jones says he has been asked to take charge of the team for the club's next two matches.

The 51-year-old took over first-team duties after Steve Bruce was sacked by the club after Sunday's 3-2 defeat to Tottenham.

Jones will be in the dugout for Saturday's trip to Crystal Palace and will remain in charge for the home game against Chelsea on October 30 while the club continues its search for a permanent head coach.

Jones said: "I spoke to the owners on Wednesday morning and they have asked me to take the team on an interim basis for the next two games, so Crystal Palace and Chelsea at home.

"As I've said previously, I am fully focussed on preparing the team the best we can to be competitive in those two games."

Jones was credited with playing a significant role alongside Bruce in last season's successful fight for Premier League survival, and went on to be part of Gareth Southgate's England staff for the Euro 2020 finals during the summer.

"Initially [my feeling] was one of upset because I had a great working relationship with Steve, he is a good man," Jones said.

"You never want to be in and around that in football because it means it has not worked. Initially on Wednesday, it was difficult, this is true.

"But we all know the speed of football and how quickly it needs to move on because if you miss a day or you miss a training session you are not as prepared as you could be for tomorrow's game.

"The focus quickly changed on Thursday and Friday in terms of positivity and getting the boys ready tactically for the game."

Newcastle's new owners held talks with former Roma boss Paulo Fonseca on Wednesday but no further discussions have taken place since then.

As it stands, there is no offer on the table for Fonseca, who was linked with Tottenham earlier this summer prior to the appointment of Nuno Espirito Santo.

Fonseca remains a contender for the vacant head coach role at Newcastle but the club are still exploring other candidates.