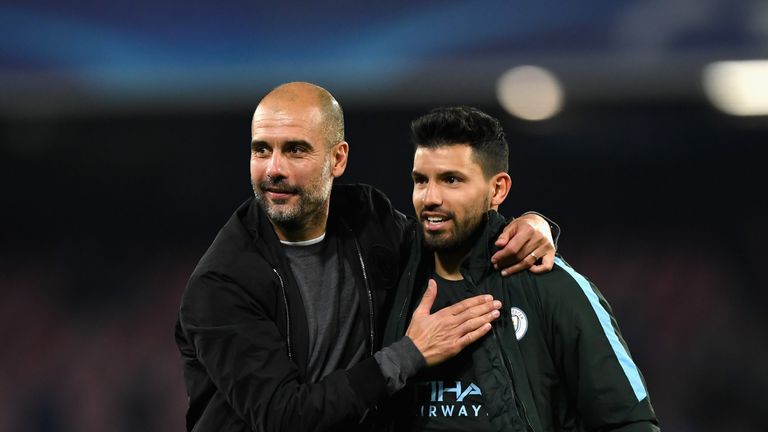 Pep Guardiola says Sergio Aguero did not need convincing after the Manchester City striker signed a one-year extension to stay with the club until 2021.

Pep Guardiola insists he did not need to convince Sergio Aguero to sign his contract extension at Manchester City.

The striker, 30, had said in March he could leave City in 2020, when his previous deal was due to expire, as he wanted to end his career at boyhood club Independiente in his native Argentina - where his family are still based.

But his new deal means City's all-time leading goalscorer will remain at the club until just after his 33rd birthday.

"I did not need to convince him, he decided for himself. I thank him so much for trusting us," said Guardiola at a press conference ahead of their weekend clash against Cardiff.

"Players like him, Vincent (Kompany), David (Silva), they show every day on the training pitch, on the pitch and off the pitch, their commitment to our club and I appreciate it a lot."

The former Barcelona manager added: "I am so happy we could extend his contract and keep him 10 years at one club.

"I did not need to convince him, he decided for himself. I thank him so much for trusting us."

"Before it was easier to find players who will stay at the same club their whole career.

"It is not bad when players try to discover new languages, or go to new places with their families, play in other leagues and improve themselves.

"It happened with Sergio. He left Argentina to go to Madrid and then came here. He is an important player for the club, not just the team.

"I don't know if he will finish his career here, because I don't know what will happen after two or three years, but it's nice to count on him."