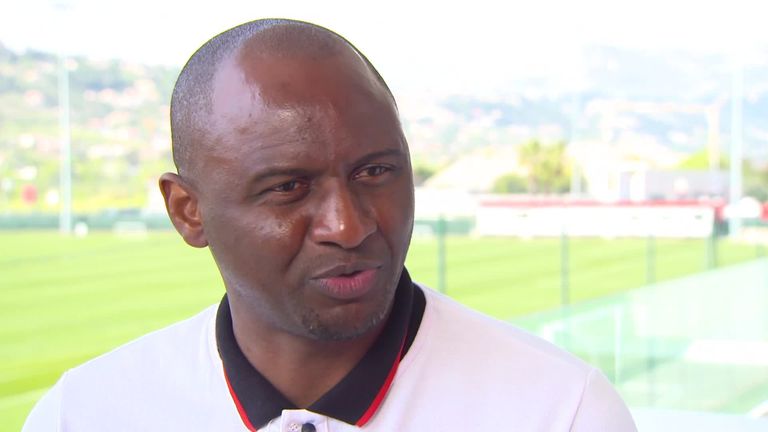 Former Manchester City midfielder Patrick Vieira thinks squad depth and composure will prove to be the deciding factors in the race for the Premier League title.

Liverpool are two points ahead of City in one of the closest Premier League title races in recent history, but the Reds have played one game more than Pep Guardiola's side.

And Nice manager Vieira, who won seven league titles across his time as a player with Arsenal and Inter Milan, believes the team that holds its nerve in the last three weeks of the season will ultimately come out on top.

"I think it [the difference in the final stretch of the season] is having all the players fit and ready to play. I think squad numbers are quite important going into the end," he told Sky Sports News.

"I think [being] calm, composed, and concentrated on what matters is really important as well, and I think it is about managing the pressure. Because the more close you get to the end, the more pressure you will have on your shoulders.

"I think the team that will be more calm will have more chance of winning the title."

City will retain the Premier League title if they win their next four matches, starting with the derby against city rivals Manchester United, live on Sky Sports on Wednesday night.

Vieira says City have nothing to fear going into the midweek showdown at Old Trafford, and believes his old side would be worthy winners of the Premier League this season.

"It's a derby, and it's always difficult to play a derby, but I think City in the last couple of years has been the best team in Manchester," he said.

"I hope they will manage to go to the end and win it because they have been really consistent. They have been playing some fantastic football.

"I really enjoy watching them every weekend, they are scoring goals, and I wish them all the best."