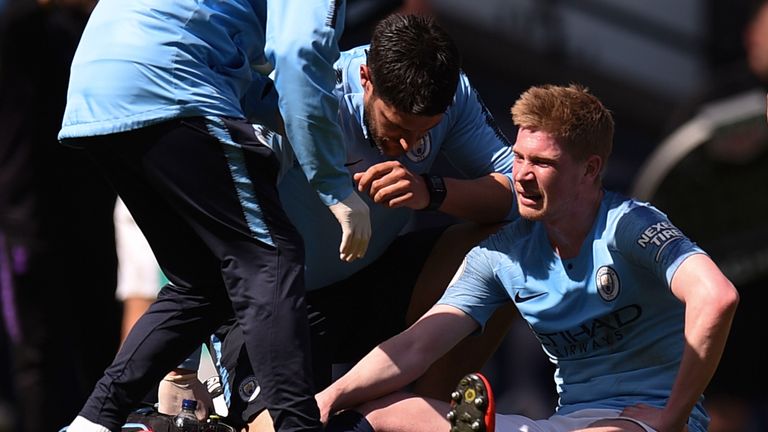 Manchester City manager Pep Guardiola says he and his staff will pay more attention to Kevin de Bruyne to try to end his injury problems.

De Bruyne was replaced by Fernandinho 38 minutes into City's 1-0 win over Tottenham on Saturday and will not recover in time for the Manchester derby.

Asked if De Bruyne will be available, Guardiola said: "I don't think so. It is a muscular problem. We will see the next days how he is getting better. But for tomorrow he is not available."

It is the latest in a string of injury setbacks for De Bruyne, who has been limited to 18 Premier League appearances this season after battling knee and hamstring injuries.

City have three Premier League games remaining after the Manchester derby, as well as the FA Cup final against Watford on May 18.

Guardiola admits he is unsure if the Belgian will play again this season.

"Unfortunately he was injured and then another one and another one. He had two or three muscular problems as a consequence of his knee," Guardiola said.

"With the competitions in England you don't have time to make preparations, the best way is to make a pre-season. We have to pay more attention to the little details when we go forward.

"Now we have to see if he can play one or two more games before the end of the season and have a good pre-season.

"He has a lovely family so his life is well-organised. We are going to speak with him, the doctors, the physios to make sure he is safe and fit."