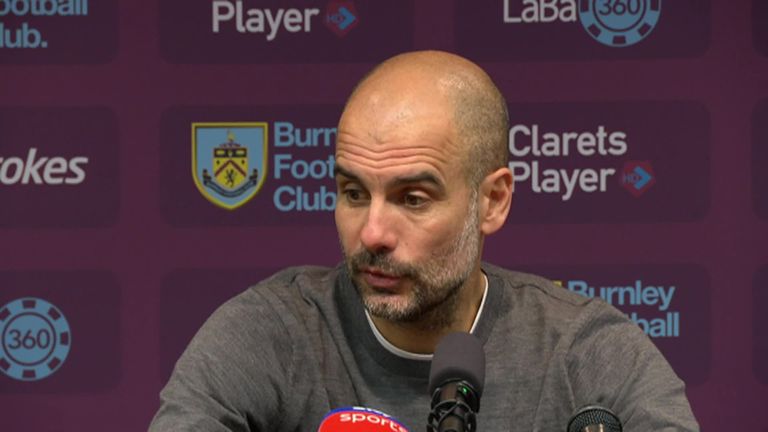 Pep Guardiola says Manchester City will beat Leicester to ensure they are top of the Premier League going into the final day of the season.

Pep Guardiola declared Manchester City will beat Leicester and go into the last day of the season top of the Premier League after their win over Burnley on Renault Super Sunday.

Guardiola's side regained the league leadership from Liverpool with a 1-0 win over the Clarets at Turf Moor, with Sergio Aguero's goal proving the difference after goal-line technology proved his strike had crossed the line by a margin of less than 3cm.

The City boss felt his side were unlucky not to score more - and that they should have had a penalty for a handball by Ashley Barnes - but confidently stated they would beat Leicester on Monday Night Football next week to go into the final game of the season, away at Brighton, top of the league.

Guardiola said: "In the second half we had another level, and created three, four or five chances which isn't easy against them - but we did it.

"There was a penalty not given, and we had other clear chances. We could have won by more but I'm so happy with the win.

"And now it's two games left, we need to be calm until next Monday, and against Leicester we are going to get three more points to go to Brighton to win the league."

City struggled to get into their stride before half-time, registering just seven shots to the 18 they managed after the break, and Guardiola - like Jurgen Klopp when Liverpool beat Cardiff a week earlier - felt some gamesmanship in Burnley's preparations had played its part in that.

He said: "We controlled the first half but the pitch was so dry, the grass was so long, and there were problems moving the ball. It was an idea of theirs but even with that we controlled things.

"After half-time we increased our desire to win, like at Old Trafford. But the way we played, I thought we would score. We knew we needed to go forward, don't concede fouls or corners, and we created a lot of chances."

Despite registering only two shots all game, Burnley boss Sean Dyche said he was disappointed with the end result against City but could not fault his players, who he said turned the game into a "cup-tie" feel at Turf Moor.

He said: "We had a real go, and that was pleasing from a mentality point of view, because when you're safe you get people wondering how it will affect our performances.

"But we took the game on, against a top side, a very technical side, and we're never going to beat them at their game so we had to make it as awkward as possible, turn it into a cup-tie feel and the game feels completely different. I thought we did that well.

"They've got some great players, some really talented players, so I'm not disappointed with the performance, but you're still disappointed not to get anything from the game."