Manchester City will be without Ruben Dias, John Stones and Kyle Walker for the final three games of the Premier League season; City are three points clear of Liverpool after beating Newcastle 5-0 on Sunday; Guardiola: “Everyone in this country supports Liverpool"

Pep Guardiola claimed "everyone in this country supports Liverpool" after his Manchester City side beat Newcastle 5-0 on Sunday to go three points clear at the top of the Premier League.

The convincing victory at the Etihad Stadium followed Liverpool dropping points in a 1-1 draw with Tottenham.

Guardiola also confirmed neither Kyle Walker, Jones Stones nor Ruben Dias - who was forced off at half-time with a muscular problem - would be fit for their last three games of the season. With Nathan Ake struggling with an ankle problem, the Man City boss said he is down to "three defenders for three games".

FREE TO WATCH: Highlights from Manchester City's win against Newcastle in the Premier League.

The Spaniard also claimed his side are not the popular choice when it comes to deciding who will win the title.

"Everyone in this country supports Liverpool, the media and everyone," Guardiola told beIN Sports, gunning for their fourth Premier League success in five years.

"Of course because Liverpool has an incredible history in European competition. Not in the Premier League, because they have won one in 30 years, but it is not a problem at all.

"The situation is what it is. We have to get nine points maybe six, it depends on the next two games in terms of goal difference.

"Now Wednesday is the real final for us, our destiny is in our hands and this is important, that's the reality."

Klopp later responded when the quotes were put to him by saying not even all of Liverpool were behind his side's title push.

City travel to Wolves on Wednesday before facing a trip to West Ham on Sunday with both fixtures live on Sky Sports. Liverpool can close the gap on Tuesday as they go to Aston Villa in front of the Sky Sports cameras ahead of playing Chelsea in the FA Cup final on Saturday.

"Liverpool are alongside [Manchester] United as the most important team in terms of titles, legacy, history, dramas for many, many things," added Guardiola.

"But we have since the last 11 or 12 years been there. I know sometimes we are uncomfortable, but I don't care if the people want Liverpool to win more than us. It is not an issue."

Guardiola will be without defender Walker after he was forced off in the second half of Wednesday's Champions League loss at Real Madrid with fresh ankle problems while centre-back Stones has missed the last two games with a hamstring injury. 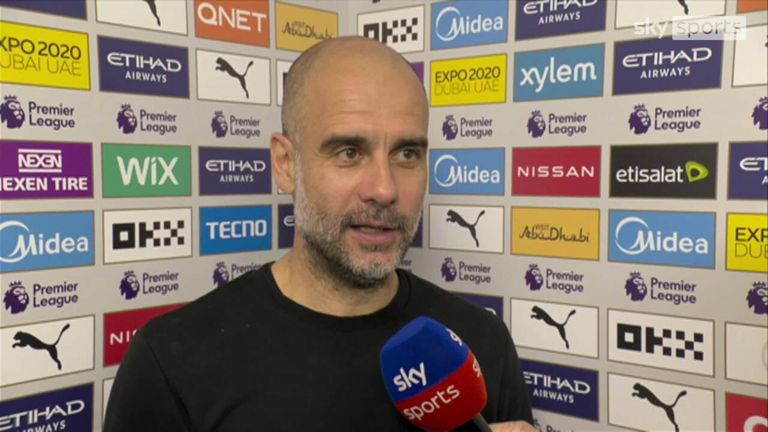 Man City boss Pep Guardiola says he had no doubt about his side bouncing back after their midweek Champions League disappointment, after they thrashed Newcastle 5-0 to move back to the top of the Premier League.

Speaking in his post-match press conference, Guardiola said: "Ruben, Kyle and John are out until the end of the season."

Fernandinho, who is leaving City at the end of the season, replaced Dias in the victory over Newcastle and asked how crucial the 37-year-old now becomes, Guardiola said: "A lot, otherwise, it's CJ (Ega-Riley) or (Luke) Mbete.

"In this situation it's not a problem, Rodri can play there. We have the academy. Everyone has to do extra. Thirteen players and a half for these games and everyone has to do more and more to help our absence. We arrive with problems and that's all. Fernandinho did good and we are going to do it."

Speaking on The Gary Neville podcast:

"With Dias injured, they are going to teams who have got systems of play that can hurt Man City. I do believe Wolves or West Ham could shock them. Both teams have had good seasons. They are awkward.

"City will need to be at their best as their centre-back partnership has been obliterated.

"The injury is a boost for Liverpool's chances. I do think there is something left in this title race. It won't go plain sailing to the end."

Asked on Friday afternoon what response he expected from his players following their Champions League elimination by Real Madrid, Pep Guardiola told Sky Sports, "I think we are going to perform well. I know we are going to play like who we are. We are going to try to win the game, playing our best, that is for sure."

There were some worrying moments early on and who knows what frailties might have been exposed had Chris Wood done better with a free header from close range after eight minutes. But what followed was an exhibition that underlined why City are top again.

With Jack Grealish and Joao Cancelo providing the width, Raheem Sterling bringing the incision, Kevin De Bruyne and Ilkay Gundogan sprayed the ball around the Etihad. Even when the tempo dipped in the second half, it was too much for Newcastle to handle.

The mood in the stands, supportive from the outset, felt like it had been helped by the result at Anfield the previous evening. That knowledge that City were no longer in a win or bust scenario took a little of the sting out of the fixture and gave them some freedom.

It was all that they needed. Away games against Wolves and West Ham might not be straightforward. But four points from those two fixtures will now be enough to ensure that City can return here on the final day knowing victory will guarantee them the title.