Benjamin Mendy's trial for eight counts of rape, one count of attempted rape and one count of sexual assault began at Chester Crown Court on Monday; Warning: This article contains descriptions of a distressing nature

A woman has told the rape trial of Benjamin Mendy how she felt there was "no point" screaming for help during an alleged attack by the Man City defender.

A jury at Chester Crown Court watched a recorded interview with the woman, now 32 years old, who is the first of seven women who have made allegations against the 28-year-old France international to give evidence in his trial.

In the interview, played on Wednesday, the woman told a police officer how Mendy, wearing just his boxer shorts, walked into an en-suite bathroom as she was naked in the shower at his house.

She had stayed the night with one of his friends following a night out in October 2018.

She said: "So he walked in and, out of shock, I said, 'You need to leave'. I saw him hold himself in his private area."

The woman said she managed to wrap a towel around herself and grab some underwear but Mendy snatched it off her, she said.

"He just did not want me to have clothes," she said. "He kept obstructing me. I kept pushing him away, he kept grabbing me back."

The woman continued: "He sat on the bed and put me on top of him."

She described how she was desperately trying to cling on to her towel as Mendy took off his boxer shorts and pulled her towards him.

She said: "I just kept trying to wriggle out. He got very close but I pushed him away as much as I could."

The woman told the officer she kept thinking: "Why is this happening? Shall I scream? There's no point as he's in his own territory."

She said: "I pretty much landed myself in that situation because I shouldn't have gone up there [to Manchester]."

The woman explained how she had met Mendy a year before, in a club in Barcelona, but she had been much more interested in his friend, who was part of his "entourage" and who invited her to the north-west in October 2018.

She said that, on October 24, 2018, she travelled up to Manchester to see Mendy's friend at the footballer's house in Cheshire.

After arriving they went out to a restaurant in Manchester and were joined by two Brazilian girls and they all enjoyed some drinking games. 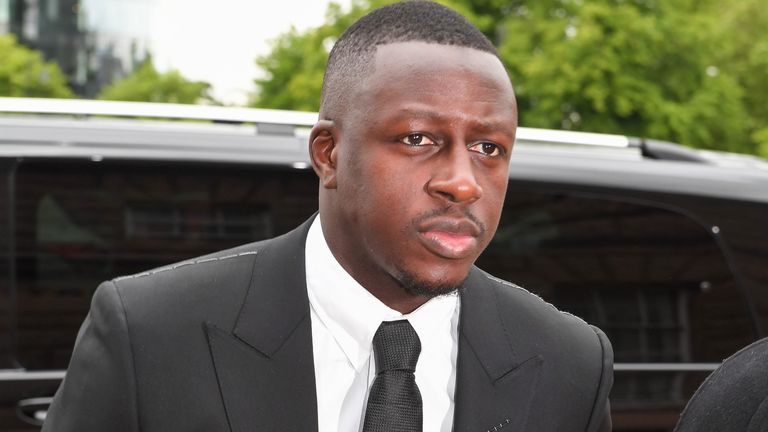 The jury in the Benjamin Mendy trial has been hearing evidence from the first of his alleged victims. WARNING: This video contains content that some may find distressing

Then they went to a club and champagne was ordered before going on to a second nightclub where she was with Mendy's friend when the footballer approached her.

She said: "At one point he came up to me and said, 'When he's not looking, I'm going to kidnap you'. I thought he was joking."

Mendy denies eight counts of rape, one count of attempted rape and one count of sexual assault. He is alleged to have committed the offences against seven young women between October 2018 and August last year.

Prosecutors have told the jury that Mendy is a "predator" who "turned the pursuit of women for sex into a game".

Eleanor Laws QC, defending Mendy, asked the witness about a text message she sent to a friend that morning before the alleged attempted rape.

Asked why she had sent it, the woman replied: "Because…he had this predatory look on his face."

Timothy Cray, prosecuting, asked how she felt during the alleged attack.

She replied: "Out of control. I was not in a place familiar to me, I was in a different territory, it was his, he was surrounded by all his friends and I had no one else there. I kept saying, 'Stop' and 'No' but that wasn't heard."

Prosecutors have told jurors that Saha Matturie was Mendy's friend and fixer, and that one of his jobs was "to find young women and to create the situations where those young women could be raped and sexually assaulted".

The jury heard that central to the case is Mendy's home, The Spinney, described as an isolated mansion, in Mottram St Andrew in rural Cheshire.

Mr Cray said there were five dates, between October 2018 and August 2021, when nine young women arrived at the footballer's address and afterwards made complaints of rape and/or sexual assault against Mendy and Saha Matturie.

There are also four separate complaints against Saha Matturie involving allegations away from Mendy's house, in Manchester and Sheffield.

The jury has heard that Mendy and Saha Matturie say in "broad terms" that all the women consented to sex, willingly with only a couple of allegations where there is a denial that anything sexual happened.

The alleged offences span from July 2012 to August last year. The trial was adjourned until Thursday morning.