Charlie Wyke has been discharged from hospital after collapsing during a training session last Monday; "My life has been saved by the actions of the gaffer [Leam Richardson] and the club doctor Jonathan Tobin, and my story may well save another life"

The 28-year-old, who has now left hospital, was training with the squad last Monday as part of their preparations for the League One match against Cambridge United and fell ill.

The forward was stabilised by Richardson, Wigan's club doctor Jonathan Tobin, and treated by their medical staff following his collapse before being taken to the Royal Albert Edward Infirmary in Wigan. He was then transferred to the Liverpool Heart and Chest Hospital.

Wigan have been in constant contact with Wyke since his collapse and the striker has issued an update on his condition.

He said: "First and foremost, I just want to stress my sincere appreciation to the club's medical staff and the NHS staff who have cared for me after I was taken into hospital last week. In particular, I would like to mention Dr. Rob Cooper from the Liverpool Heart and Chest Hospital for everything he has done for me over the last week or so.

"I feel it's important to tell my story to our supporters and to the wider public, because my life has been saved by the actions of the gaffer [Leam Richardson] and the club doctor Jonathan Tobin, and my story may well save another life. 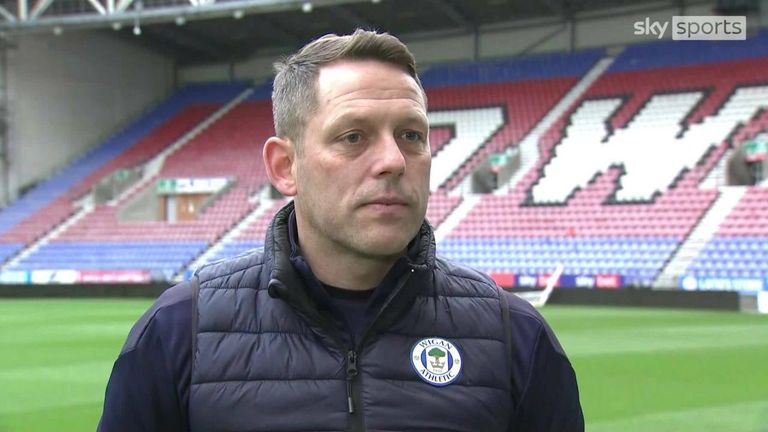 "As you are aware, I collapsed during training on Monday. I suffered a cardiac arrest and required CPR, and I am told it was only the quick response of the gaffer to initiate the resuscitation process and then the continuation from the Doc that saved my life. I will be forever grateful that due to their actions - and those of my team-mates and other staff - I am here to talk to about the experience.

"Thankfully, just a few weeks ago, the training ground staff had received CPR training, which has clearly proven to be life-saving with the way in which the gaffer reacted to my collapse and initiated the CPR on the training pitch. I think that sends out a message of just how important it is that coaches and staff have that training.

"The support from my team-mates over the last few days has been incredible; the gesture to celebrate with my shirt at Plymouth just goes to show what a top group of lads we have here at Wigan. I've heard the fans singing my name when I've been watching the games from hospital too, which has been amazing to hear - I'm really thankful for that support.

"I have received thousands of messages from supporters of all of the clubs I have played for, the wider football community and beyond, and the well-wishes have meant the world to me and my family. It was a real boost for me to see the photo of my former teammates at Sunderland wishing me well - a class touch from a great set of lads.

"I'm looking forward to going home to my son, partner and friends and family for the next few days.

"I can't wait to get back to the training ground next week to see the lads, where I will start some light training that begins the process of hopefully being able to get back to full training with the team next year.

"Thank you for all of the support. Charlie."

Wigan Athletic chief executive Mal Brannigan said the club has been overwhelmed by messages of support from the football family and beyond and added that everyone is looking forward to seeing Wyke back at the training ground in the coming weeks.

"I'd echo Charlie's sentiments that we are incredibly grateful to the quick thinking and reaction of Leam and the doc as well as the staff and players at the training ground last Monday," he said.

"Clearly it was a traumatic experience for those that witnessed Charlie's collapse and everyone has rallied together to support one another in the days that have followed.

"As I said last week, the absolute priority for everyone associated with Wigan Athletic is Charlie's health and wellbeing and we'll continue to provide support to Charlie and his family.

"We're looking forward to Charlie's return to Christopher Park next week; as Leam mentioned at the weekend, Charlie isn't just an excellent footballer, but a really good person that is so popular amongst his team-mates and the staff here.

"The chairman [Talal Al Hammad] and I have been able to speak to Charlie on the phone, he's been watching every minute of our games from hospital and I know he is eager to watch the lads at the DW next week.

"On behalf of everyone at Wigan Athletic, I would like to express our gratitude to the football family for the well-wishes we have received on Charlie's behalf."

He tweeted: "I would like to thank Leam Richardson for his endless contribution to this wonderful club. He has continued to show that the club's best interests and players are always his priority.

"Through the hard times, the ups and downs, Leam has been there, always offering his full support, advice and encouragement. For that we will always be grateful. Last week, Leam made some brave, quick decisions that saved Charlie Wyke's life.

"In honour of Leam and all that he has done for the club, players and fans, we will be renaming the South Stand to the Leam Richardson Stand."