"Declan will go on to be a future captain of West Ham, there's no doubt about that."

David Moyes is unequivocal in his conviction about the quality of Declan Rice. The young England midfielder has been the shining light in a frustrating season for West Ham, and Moyes believes Rice has all the attributes required to become a key figure at the club for years to come.

Moyes is well placed to judge Rice's trajectory. He gave the 21-year-old his first consistent run of senior football when he was in charge in 2017/18 and, returning to the club this season, Moyes has seen a player making significant progress. And a player determined to be better every day.

"I can see big improvements from when I left," Moyes tells Sky Sports at West Ham's Rush Green training base, fresh from coaching Rice and his team-mates through a recovery session after Wednesday's defeat to Manchester City.

"He's now someone who is physically much better: he's much quicker, much stronger. And he has a better understanding.

"I think he's learning under Mark Noble the leadership side of it. He was a quiet boy when I first came to the club, but he's developing a good personality. He's got a lot of things to do better but as a young boy he's doing very well.

"So many of the young boys these days are looking to be improved by coaches but quite often it's your own self development as a player. You have to develop yourself, you have to understand, you have to pick things up very quickly and not always rely on you coaches to be your guide.

"Many of the great players got into a team and had to find their own way to do things. Declan's doing that himself. He is self-developing - and he's doing an awful lot of things which prove why he's getting into Gareth Southgate's England squads."

Moyes described Rice earlier this month as 'arguably the best holding midfielder in the country', and the stats underline the elite contributions West Ham's young midfielder is making in the Premier League this season.

Among defensive midfielders, only Leicester City's Wilfred Ndidi has made more tackles and interceptions, only Manchester United's Fred has made the same number of dribbles and only Southampton's Pierre-Emile Hojbjerg has made more recoveries. Across a range of skillsets, Rice ranks with the best. And, given his age, the signs are he'll keep getting better, too.

"There are bits of his game which we are hoping he'll improve with time, with development. But at the moment he's taking a big role at the club," said Moyes, who believes current club captain Noble is an ideal role model for Rice. 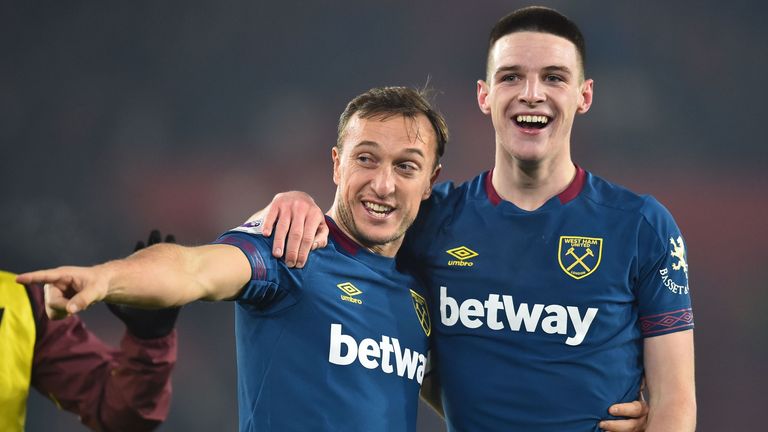 There's no one better for Declan to look up to. You need people the young players should be aspiring to.

"There's no one better for him to look up to at this club. Mark will give him a true reflection on how he is and how the club is. He's good that way. But Mark probably learnt from really good people in front of him over the years, he had people to look up to. You need people the young players should be aspiring to."

While the future is bright for Rice, Moyes' immediate priority is keeping West Ham in the Premier League. They currently sit third-bottom in the relegation zone and their fate could well be shaped by a run-in which includes a series of games against teams around them in the table.

But first they must find their way through a brutal run, with Liverpool next up on Monday Night Football, and games with Southampton, Arsenal, Wolves, Tottenham and Chelsea to follow.

The trip to Anfield is an ominous task but while Moyes' pragmatic approach at Manchester City was criticised by some West Ham fans, he insists his team will need to follow a similar gameplan against Liverpool - but be better when they have possession.

"But it wasn't for a lack of the players not trying to carry out a gameplan, it was just moments when we had that opportunity we didn't take or use it as well as we should have."

Moyes can at least lean on some recent experience of Jurgen Klopp's side. West Ham were beaten 2-0 at the London Stadium by the Premier League leaders just before the winter break, when they forced Reds' goalkeeper Alisson into several impressive stops.

"We learnt a lot from the game," said Moyes. "I thought we had some really good moments and Alisson had one or two very good saves on the night. They scored on the counter-attack from our corner-kick and we felt the first goal on another day might have been given for handball but wasn't.

"But you're going to have to defend really well because of the quality of players they've got. We're aware of what they're capable of. It's stopping them that's the hard bit."

Perhaps Jarrod Bowen could make the difference for West Ham. The £20m January signing from Hull City made his West Ham debut as a late substitute against Man City and, according to Moyes, has settled in impressively.

What can he bring to West Ham's attack? "I hope it's goals," said Moyes, whose side have scored just five times in six games since his opening 4-0 win over Bournemouth. "In training I've seen someone who looks very sharp, who looks match fit, who is ready to play.

"We've all been really impressed by his sharpness and his work and his ability to score goals has been noticed already. But what I don't want to do is heap a load of pressure on a young boy who has come from the Championship to be the saviour of what we're doing here.

"I have to make sure I use him in the right way, at the right times, when I feel it's correct. But I have to say, he's looked good, he's not looked out of place in training and that's great credit to him."

Instead of one individual player - be it Rice or Bowen - Moyes says the key to Premier League survival lays with the whole group at West Ham - fans included.

"Team spirit, the togetherness we had from everybody," were the key ingredients to West Ham's survival during his previous tenure, says Moyes. "I remember we had a disappointing spell, we didn't think the crowd was with us, and we came back and we galvanised the crowd, and they galvanised with us.

"In the end, I remember my last three games we beat Leicester away, we drew with Manchester United and we beat Everton. It might need something like that again this year.

"But we need the crowd with us, the supporters with us and hopefully we can give them something to shout about."