"If a high-profile black player such as Raheem Sterling is experiencing racial abuse then everyone piles in and that drives traffic, which increases their advertising and profits," Deeney wrote in his column in The Sun

A PFA-commissioned study has shown more than 3,000 explicitly abusive messages were sent to 44 high-profile current and former players during Project Restart.

Fifty-six per cent of all the discriminatory abuse identified during the study was racist.

Manchester City and England forward Raheem Sterling questioned whether there is a will from the big social media companies to take any action against the racism on their sites.

Deeney has echoed Sterling's comments and expressed his frustration with the lack of proactive action.

"Do these companies even want to change things? Do they want to stop the abuse?," Deeney wrote in his column in The Sun.

"If a high-profile black player such as Raheem Sterling is experiencing racial abuse then everyone piles in and that drives traffic, which increases their advertising and profits.

"If I scroll down my Instagram replies, the tenth one down features a racist emoji - which is not unusual.

"So I follow the protocol, which is to block the user and report the message under the category of 'hate speech and symbols'. Then I am told that an emoji with a monkey and a banana is not considered racist.

"I've even reported being called a 'black c***' and been told that isn't hate speech either. They need to change their algorithms to reflect what are obviously racist posts - but do they even want to?" 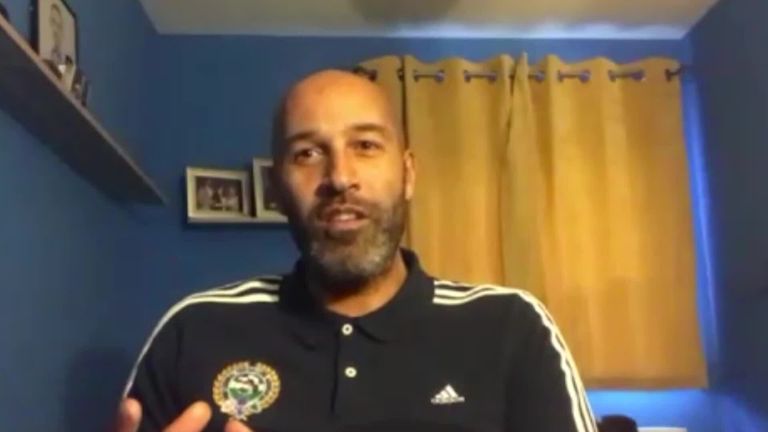 Social media companies must take on the responsibility to act firmly on online abuse and not rely on football players to report it, says PFA Equalities Education Executive Jason Lee

"Over the last few years, we've invested billions in safety, tripled the size of our safety and security team to 35,000, and built artificial intelligence technology to proactively find and remove this type of content.

"Discrimination is a societal problem and we need collective action. We don't want any form of discrimination on our apps and have recently partnered with Kick It Out on its Take A Stand campaign, where we announced a series of action-focused initiatives centred around reporting and education.

"We've also introduced technology to give people more control over their experience, including a setting for public figures to prevent people they don't know from messaging them. To learn more about how you can take a stand, report discrimination or access educational resources, add 07432140310 to your WhatsApp contacts and message 'hi'."

A spokesperson for Twitter has told Sky Sports News: "Racist behaviour has no place on Twitter and we strongly condemn it. We continue to take action on any account that violates the Twitter Rules.

"We welcome people to freely express themselves on our service, however, as outlined in our Hateful Conduct Policy, account holders cannot promote violence against, threaten or harass other people on the basis of race, ethnicity or other protected groups.

"We have proactively engaged and continue to collaborate with our valued partners in football, to identify ways to tackle this issue collectively. We remain focused on proactively actioning hateful content - now more than 1 in 2 Tweets are identified and removed without reports.

"We want to reiterate that abusive and hateful conduct has no place on our service and we will continue to take swift action on the minority that try to undermine the conversation for the majority. We will continue to play our part in curbing this unacceptable behaviour - both online and offline."