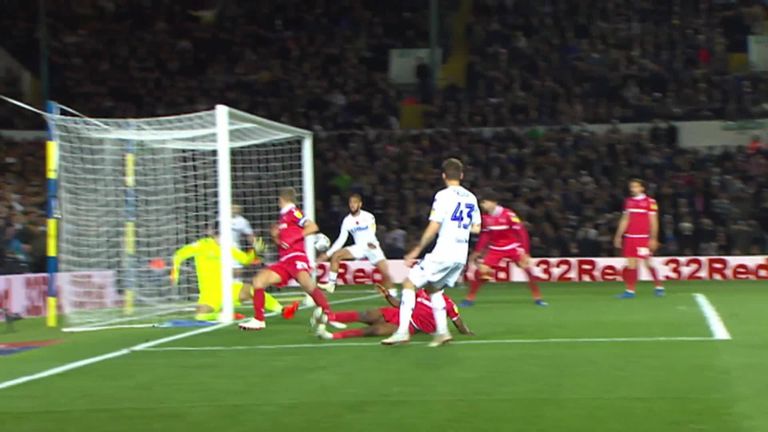 Kemar Roofe was at the centre of controversy as he handled the ball over the goal-line to secure Leeds a 1-1 draw with Nottingham Forest, with Sky Sports' Don Goodman calling it 'blatant'.

Leeds forward Kemar Roofe was at the centre of controversy as he handled the ball over the goal-line to secure a 1-1 draw with Nottingham Forest, with Sky Sports' Don Goodman calling it "blatant".

Forest had taken the lead in the 11th minute at Elland Road, Jack Robinson scoring his first goal for the club when he nodded Joe Lolley's corner beyond Bailey Peacock-Farrell.

But Leeds - who had enjoyed almost exclusive possession of the ball throughout the game - drew level with just eight minutes to play, as Roofe handled Mateusz Klich's cross over the line.

Referee Geoff Eltringham consulted his linesman, however both agreed that no infringement had been found, despite significant protests from the Forest playing staff.

When questioned by Sky Sports' David Craig after the full-time whistle, Roofe said: "I just saw the ball flash across. The ball hit my hand - call it ball to hand. It's up to the ref to give it and he gave it.

"We were the better team, we were playing our football, everyone was doing their job and you could tell from the first half they were wasting time. We kept pushing and managed to get a result."