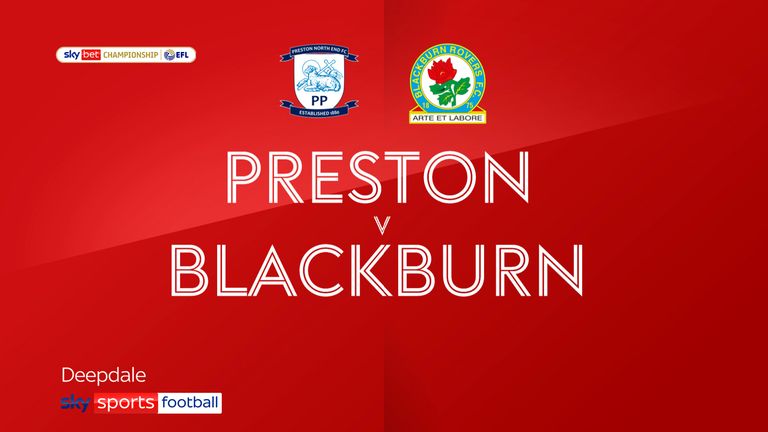 Highlights of the Sky Bet Championship match between Preston and Blackburn

Blackburn secured an emphatic 3-0 victory over 10-man Preston in the Lancashire derby at Deepdale.

The decisive moment came just before half-time as Preston defender Joe Rafferty was sent off for fouling Sam Gallagher in the box.

Armstrong fired home the subsequent penalty before Blackburn's lead was doubled by Brereton shortly after the break. Former Preston youngster Dolan then compounded the Lilywhites' misery with a third in the closing stages.

Tony Mowbray's side dominated early possession with midfielder Lewis Holtby, returning from illness, finding useful pockets of space in the opposition half.

Preston, winless in five at Deepdale before Saturday's win over Sheffield Wednesday, struggled to gain a foothold and in-form Rovers striker Armstrong had a fierce effort from distance well blocked by Ryan Ledson.

Rovers captain Darragh Lenihan's superbly struck volley was saved and Armstrong was foiled on the rebound as the away side looked to make early pressure pay.

Armstrong then fired over from 20 yards following a swift Rovers counter.

Soon after, right-back Ryan Nyambe picked out a delightful through-ball in behind the Lilywhites defence but Patrick Bauer covered well to block Armstrong's shot.

Preston were then dealt a huge blow on the stroke of half-time. Gallagher escaped brilliantly to burst in behind Rafferty and was too powerful and quick for the left-back, who was dismissed for pulling the Rovers forward down.

Armstrong made no mistake from the spot with a crisply struck effort low past Rudd's right hand to score his 12th Championship goal of the season.

Preston came out fighting in the second half and almost found an equaliser through Tom Barkhuizen's curled effort that skimmed the post.

The visitors then secured their third 15 minutes from time as teenage substitute Dolan, who signed for Rovers this summer after failing to earn a professional deal at North End, tapped into an empty net as Brereton beat the offside trap.

Gallagher was then denied a deserved goal by the offside flag as Mowbray's men pushed for a fourth late-on, but the match ultimately ended in a 3-0 away victory for Rovers.

Preston's Alex Neil: "We've found it difficult at the moment because of our personnel and lack of balance at the back. We're a transition team at the moment. "Their goal comes from us having the best chance of the half. Joe doesn't get across and make his challenge early enough. It's hard enough applying the pressure on Rovers with 11 men, never mind 10.

"What I didn't want to do is be too aggressive and leave ourselves exposed because at the moment we lack Ben Davies and Andrew Hughes, who help us in transition and with mobility. Some of the players made noises that they want to get up and get after it but they couldn't get after it with 11 men. My task sometimes is to protect them as much as possible and I'll take all the flak for that, which is normal, but I do believe if we had gone after the ball it would have been more damaging for us."

Blackburn's Tony Mowbray: "We're on the way to being a decent team and hopefully today is the start of that. I think we know we're capable of performances like that. They've been coming. The team that we picked got the job done and we were reasonably comfortable from the start. With total respect to Preston, it was a game where we came here to win.

"We wanted to play on the front foot and at home they have found it tough so we tried to capitalise on that, and we did. The sending-off helped. I don't think it's a coincidence other teams have had players sent off against us. Our explosiveness on the break causes problems and they end up bringing our players down."