"I don't think anybody could blame me for taking it, I don't think my stock has gone down that much. You don't become a bad manager overnight."

When Nathan Jones spoke to the press in the immediate aftermath of Stoke's 1-0 defeat to Huddersfield on October 1, he seemed totally resigned to losing his job.

At that point, the Terriers were rock bottom of the Sky Bet Championship, having taken just a solitary point from their opening eight games, with Jones' men just a point and a place above them.

A late strike by Juninho Bacuna settled the clash at the bet365 Stadium, leaving the Potters reeling, struggling under the weight of the gradually-increasing levels of expectation and, as a result, planted to the base of the table. "I've tried to arrest the downward spiral and I've been unable to do that," Jones conceded after the full-time whistle.

"That was a real difficult defeat to take," he said during an interview with the Sky Sports EFL Podcast.

"You really felt the pressure had got to the players then and you could only see one way out. I didn't want it to end there because sometimes it only takes a matter of weeks to turn things round and we believed we were doing good work, that's the thing.

"I wouldn't say I was expecting to [get sacked] but it wouldn't have come as any great surprise the way it was and because Huddersfield were below us in the league and they were on a poor run themselves. We controlled the game and Huddersfield probably had two or three chances: one in the first few minutes and one when they scored.

"I was saying to the players, I didn't want this to be the last game because if it had been, it would've been a shame because we'd have been remembered for that game and we did better work than that.

"I spoke to the owners first thing on the Wednesday and I said that I wanted to continue, it's just that when you're in the limelight or you get interviewed straight after the game, sometimes emotions are raw and if that had been the last game that I'd taken, it would've been a shame but I couldn't have had any arguments."

As it turned out, that was not to be the end of Jones. Club chairman Peter Coates persisted with the man he had persuaded to leave eventual League One champions Luton nine months earlier and was initially rewarded for his faith, with wins over Swansea and Fulham either side of the October international break.

Jones was so ecstatic at the end of the latter that he raced onto the pitch at full-time and completed a lap of the pitch, geeing up the fans, who no doubt expected the consecutive victories to be the platform upon which the Potters could build. Yet consecutive defeats to Sheffield Wednesday and Millwall followed and the axe was subsequently wielded.

But, with the strength of the squad at his disposal, just why did the opening months of the season get off to such a terrible start?

"A number of factors," said Jones. "We made big errors, missed key chances and we had a lot of bad luck. That's not just me sitting here sour grapes because, over a period of time, you get what you deserve but, at times, things that were happening in games were really difficult to fathom.

"That's what really contributed because with the owners that I had, with the patience they were showing me, we probably only needed two or three more wins.

"They would have seen what was going on underneath, they would've seen the work that we were doing but they did see the work that we were doing behind the scenes and how we'd united the club and everyone was behind us. And they would've persevered with it, it's just we got to a point where it was getting very difficult to see things changing and I hold my hands up for that.

"But in terms of our performances, our numbers, our possession, chances created, all the numbers on expected goals, we've said this a number of times, we were top six. We should have been top six, but, for a number of factors, we had a lot of bad luck go against us, which contributed to us not getting the results that we should have."

A humble, modest character, the 46-year-old enjoyed lengthy spells with Southend, Brighton and Yeovil in his playing days, before setting Luton's aforementioned title charge in motion until the beginning of 2019. Nonetheless, he admits the winless streaks had a psychological impact upon him.

He said: "It does affect you because when you lose games - I haven't been used to losing games in my life, really. I never lost this amount of games in any season, since I've been a coach. I've probably been far more successful as a coach and a manager than I was as a player.

"I'm the type to take things on myself. I didn't once come out and blame anyone because it's on me. I'm the leader. I was the leader, I was employed to lead that club and that's what I endeavour to do, day in, day out. I try to take a lot of pressure off my players, pressure off my staff, sometimes, some would say, too much. But that's how I've been, that's who I am and yes, it does get to you. I feel more for the people around me than for me."

Now, for the first time in a long time, Jones is out of work. But it appears that he is not cut out for a life without football quite yet.

He added: "You wake up and you're not thinking, right who do I play? Our days were really long, they have been since I've been a coach and manager - we do 12-13 hours a day regularly. You are up at six, not getting back til quarter-past-seven at night.

"There's a natural process of de-stressing because you haven't got the things on your mind that you had before but I've kept busy in terms of visiting family, I've been out at games, I've watched games and it's time for me now to reflect. It's a time for me to reinvigorate my knowledge, my player knowledge, of team's systems.

"I'll evaluate my own tenure because that's important, I'll also evaluate my time at Luton and what went well there because I haven't had any time to do that yet. We had an incredibly successful three years but straight from that, I came straight into a real tough task at Stoke.

"There's a lot of things that I'm planning on doing in my time now. I don't want to be out of work for a long period of time, I want to get refreshed, I want to make sure I learn from this experience. I want to make sure that I use these tools to be better so that when the next opportunity comes, I'm far better equipped than I was 10 months ago." 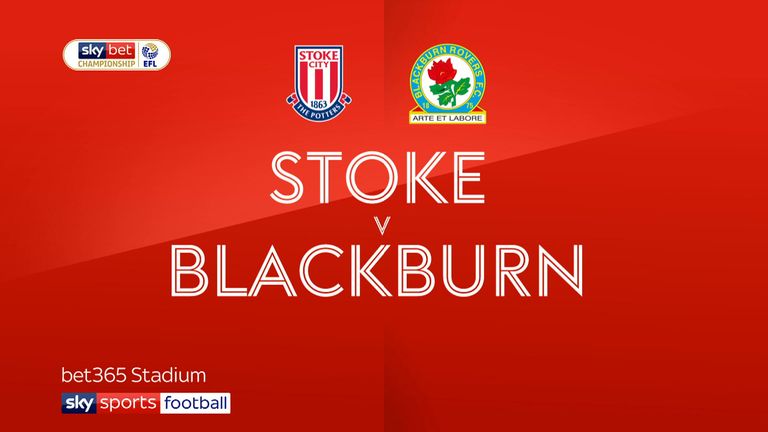 Highlights of the Sky Bet Championship match between Stoke and Blackburn

However, he does not regret taking the Stoke job in the first place.

"I don't think you can ever have any regrets; you make decisions with the information that you have available at the time and hindsight is a wonderful thing," Jones said. "Realistically, at no point did I want to leave Luton. We'd had a number of opportunities and there was a lot of talk. I'd been linked with pretty much everything.

"I don't have any regrets. I'd have done a few things differently, I'd have made my exit from Luton very, very differently and I do regret that kind of thing. But at the time, either I didn't have the knowledge or the opportunity to leave better.

"I don't think anybody could blame me for taking it, I don't think my stock has gone down that much. You don't become a bad manager overnight. We haven't come out of it as being inept, as being terrible. It's been a tough time, we've had a tough time. But I've learned from it. I know I'm a better manager, I'm a 100 per cent a better coach, and definitely a stronger person."