Sean Dyche says Burnley will play with freedom against Tottenham 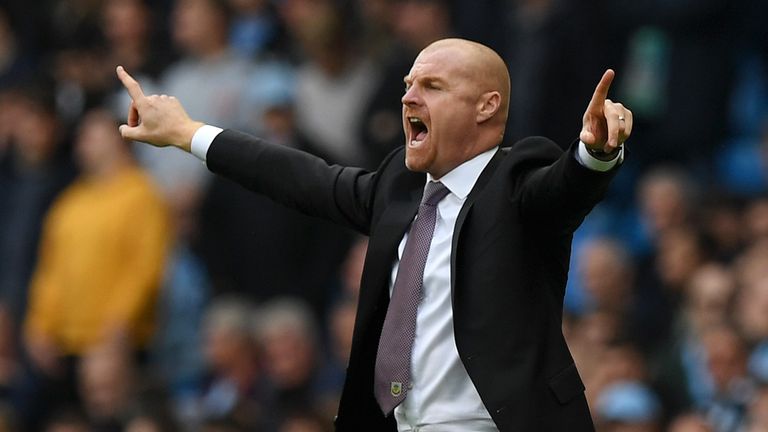 Sean Dyche believes Burnley can play with freedom when they face Tottenham on Saturday, with the weight of expectation firmly on the hosts at Wembley.

Spurs are currently third in the Premier League and are also through to the last 16 of the Champions League after holding Barcelona to a 1-1 draw on Tuesday night.

Burnley, meanwhile, are just two points outside the relegation places, after a crucial 1-0 win over Brighton last weekend.

Dyche has been impressed with Tottenham this season but believes Burnley are capable of causing a shock result in the capital.

"Tottenham are having a fine start to the season and they had a great result the other night. I really like the way they go about their business," said Dyche.

"Their manager plays direct football but in a passing style, if they can get out quickly then they do. They're effective.

"We go down there with a bit more freedom, the expectation changes. Last week against Brighton when there is really heavy expectation for us to get a result.

"It changes when you go to places like Tottenham. That gives us just that little bit of freedom to take the game on and hopefully deliver a very good performance, because we will need it."

Tottenham head into the match buoyed by their midweek draw at the Nou Camp, a result which saw them progress to the knockout stage of the Champions League at the expense of Inter Milan, who were held at home by PSV.

"I thought it was a very good result and the way they went about it," said Dyche. "They were brave, they pressed the lines, they got in the passing lanes, they squeezed the pitch as much as they could and I thought they were brave in doing so.

"There was a bit of noise at the start of the season about how they hadn't brought any players in.

"I wasn't too sure about that - I was looking at the players they have got and thought it was a pretty handy group there. They are showing that so far this season."

Burnley will hand late fitness tests to Steven Defour and Johann Berg Gudmundsson ahead of the trip to Wembley.

"Steven and Johann will be touch and go for the weekend," said Dyche. "Both are making forms of progress but I'm not sure they'll make it."