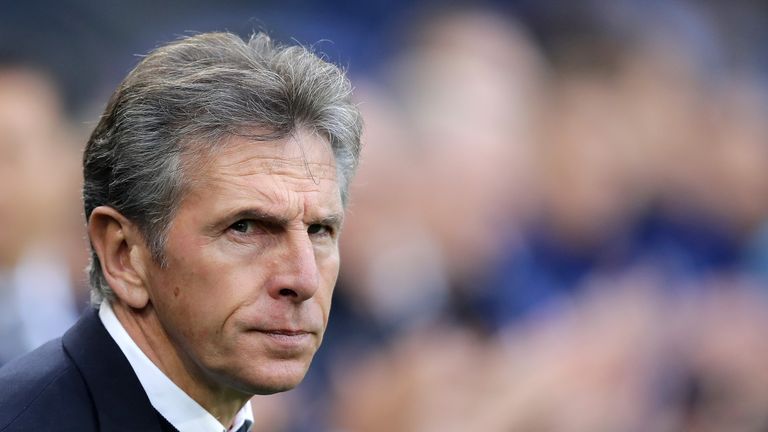 Claude Puel says his focus is on the Carabao Cup quarter-final against Manchester City amid a slump in their Premier League form.

Claude Puel has dismissed feeling under pressure at Leicester ahead of their Carabao Cup quarter-final against Manchester City.

Leicester have lost their last three fixtures and managed one Premier League win in their last six, slipping to 12th in the table.

The Foxes host Manchester City in the Carabao Cup quarter-final on Tuesday, live on Sky Sports Football, having lost on penalties to Pep Guardiola's side at the same stage last season.

Asked whether he believed his position was under threat, Puel said: "No. Why? When we need to have a good reaction, we keep our concentration and focus in the game and to give our best.

"It's not time to speak about Premier League games, we will see before the game against Chelsea.

"We need to take this game without pressure but with strong feeling to do our best to win." Manchester City have lost two games all season and returned to winning ways in the league on Saturday against Everton, and Puel is well aware of their strengths under Pep Guardiola.

"We know this team. It is a team that has the ability to improve their [performance] against any opponent," he said.

"All the opponents need to adapt their play against them. It's a strength and with Barcelona I think they are the only team with the ability to improve their game in all circumstances."

I think we will have opportunities tomorrow [Tuesday] if we play with our intensity, fighting spirit.

Puel said last month he was targeting Carabao Cup success as a tribute to late Foxes owner Vichai Srivaddhanaprabha and the Frenchman insists his side will have a chance of pulling off a surprise result.

"They have all the solutions. But we have [enough] to realise a good performance and to play a full game against them. It is a cup game. It is a different game than the Premier League. I think we will have opportunities tomorrow [Tuesday] if we play with our intensity, fighting spirit."

Puel, who refused to be drawn on potential incoming during the January transfer window, could see former Leicester player Riyad Mahrez play against his former side for the first time since the Algeria international left for the Etihad in the summer.

"I think it will be a good feeling for him to see Riyad again," Puel said. "Of course, I hope he remains on the bench!

"That is the most important thing for us. But it is always a pleasure to see Riyad again because he gave all the time his best for Leicester, his teammates. We are happy for his journey, momentum with his new club."