By Lyall Thomas in Amsterdam 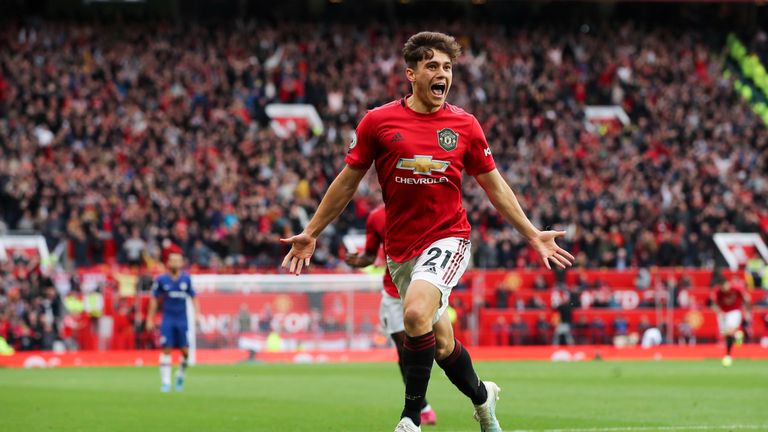 Leeds director of football Victor Orta has revealed how data helped him pitch Daniel James as a transfer target to the board before his failed transfer from Swansea in January.

Six months before he signed for Manchester United in a £25m deal, the Wales winger was holding up a Leeds shirt for the cameras only for a move to Elland Road to break down.

Football clubs and agents met at the annual Wyscout forum in Amsterdam this week, ready to discuss business for the January transfer window and beyond.

Although the player was clearly outstanding to the naked eye, Orta says James' limited playing time meant background data was thin, so he had to harness newly developed 'expected goals' and 'expected assists' stats, which Wyscout provides.

Speaking exclusively to Sky Sports News at the Wyscout forum in Amsterdam this week, Orta said: "I don't tell any secrets about the Daniel James situation.

"We detected first from the human eye, about the UK recruitment about Daniel James, that he would fit with our style - and Marcelo Bielsa totally agreed.

"It's true that, at that moment, he had only played 14 games in the Championship and we were trying to find more accuracy. I asked for a report from a company in football analytics and in this moment Daniel James had zero goals and one or two assists.

"They made a big report about expected goals and expected assists and they predicted he would finish the season with six or seven goals and eight assists, and it was a step that (meant) I felt more comfortable making that decision.

"First was the scout - the eye - thinking this player can fit for us. But this report gave me more accuracy to propose to the board that this player can be a fit for January.

"Then in the end what happened was (the deal) not finished and Daniel James did play for Leeds United. But I always have this report as an example of a good use of data."

Orta and his recruitment staff were at the Wyscout event to meet other clubs and agents ahead of the January transfer window, as Leeds look to gain promotion to the Premier League this season.

Although he is open to making further additions in the New Year, the former Valencia and Middlesbrough recruitment chief warned they must be careful to make the right choices in a notoriously difficult month for good transfers.

"We need to be careful because the availability of the player and the overprice is a problem, and the financial fair play rules that are really tough in the Championship is another important question mark.

The Wyscout forum took place at Ajax's Amsterdam Arena on November 13 and 14, in which top names in player recruitment such as Wolves' John Marshall and Orta gave presentations on the modern scouting methods they use to unearth new talent.

Among the English clubs that sent officials to the event were Manchester City, Tottenham, Brighton, Wolves and Norwich.