Leeds striker Patrick Bamford has not played since September 17 after picking up an ankle injury; Leeds boss Marcelo Bielsa: 'It's not a simple injury...when he will be available to play, can't be given exactly'; Leeds confirm 49ers Enterprises have increased their minority stake in club Leeds head coach Marcelo Bielsa says there is no date yet for Patrick Bamford to return from an ankle injury, with the striker having last played in September's draw at Newcastle

Leeds boss Marcelo Bielsa is unable to put a time frame on Patrick Bamford's return from an ankle problem after insisting it is "not a simple injury".

Bamford, who scored 17 Premier League goals last season, has not played since the draw at Newcastle on September 17. It was hoped he would be back after the October international break, but the striker has still not returned to full fitness.

The 28-year-old will miss Sunday's clash with Leicester at Elland Road, extending his absence to eight matches and meaning that he has missed more games than he has played this season.

Asked when Bamford might return, Bielsa replied: "It's all subject to his evolution.

"It's the problem in his ankle. The time of his diagnostic has not been fulfilled yet. It's not a simple injury and because of the disappearance of the pain or the tolerance of the pain we can't give an exact prognosis.

"The response I give when I say it's subject to his evolution, don't let it be interpreted as me not giving all the information I possess. The injuries like this, their prognosis, when he will be available to play, can't be given exactly." 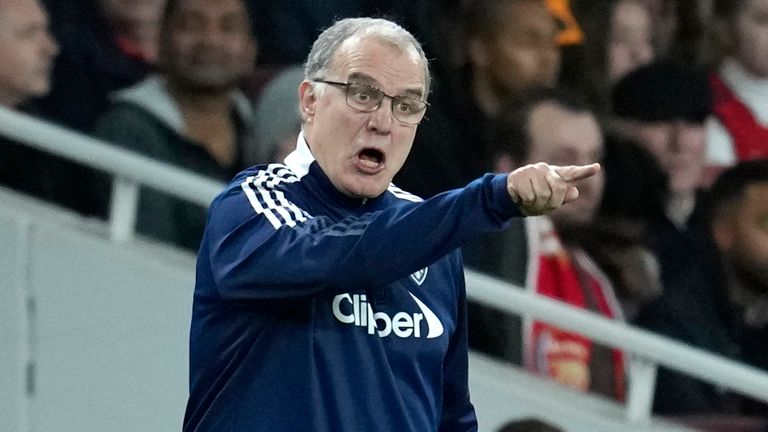 Leeds have scored just five goals in Bamford's absence, with Bielsa trying Rodrigo, Tyler Roberts and Joe Gelhardt up front in an attempt to fill the void.

Bielsa's team, who finished ninth last season on their return to the Premier League, could be in the relegation places by the time they kick off against Leicester on Sunday.

Asked if other players need to do more in front of goal when last season's top scorer does not play, Bielsa said: "If you also look at the data you will notice that Bamford has also gone times without scoring when he has been in the starting line-up for Leeds. FREE TO WATCH: Highlights from Leeds’ win at Norwich in the Premier League

"To have a goalscorer is always very important, the fact that Patrick scored a goal every two games last season is impossible to ignore and we prepare ourselves to be able to solve the absence of any player."

Meanwhile, Leeds have confirmed that 49ers Enterprises have increased their minority stake in the club to 44 per cent.

Chief executive Angus Kinnear said: "We are delighted to see Aser Ventures strengthen their partnership with 49ers Enterprises who have clearly been impressed by the quality of the project.

"Aser Ventures and chairman Andrea Radrizzani remain unequivocally committed to the club, whilst all those involved with the 49ers are actively working with our management team on a daily basis to help to drive us forward, putting us in
a strong position to achieve our goals in the coming years."